If paying the U.S. MILITARY IS STILL PAYING  UK and Rothschild petroleum fuel subsidies after the Gulf of Mexico disaster much less after a revolutionary war to break free from the decadent royakty and Lords of London in the 18th century and now after having spent a decade going broke fighting dieingf and becoming permanently crippled over the lie that 9/11 was the faultof Iraq or Afghanistan when it is clearer than ever that it was iunside job that included Israelis of ICTS International 'guarding' Logan Airport and Newark New Jersey,etc.,etc., - then rushing full steam into North Africa without investigating or covering up again who is really behind the decade of war crimes and murder of Americans on 9/11 as well as the London subway bombing of 7/7/05 then I quess we deserçve everything we got and everything we are going to get for allowing international petroleum,arms and drug traffickers who have infiltrated our government at the highest levels to draw us unendingly into quagmires and go increasingly into their debt .Barack Obama is part of the CIA and Zionist UK and Israeli cabal aghainst Americaa and Americans.He covered up for IOCTS International in 2009 when they allowed the Nigerian Islamic 'crotch bomber' Mutallab to board flight 259 from Schiphol Airport controlled by the Rothschild;(and GE and John Hancock)  funded ICTS International of Ireali Mossad and Menachem Atzmon who has free reign in the U.S. and the UK and the Netherlands up to this day !
And if you don't know by now the CIA, that put Barack Obama in as our 'first black president' does not work for us but like Baarack Obama's grandfather who he called a n--ger for being a prostitute of the British government in Kenya - well Barack Obama is more like his grandfather or his CIA MOTHER'S SIDE OF THE FAMILY THAN HE CARES TO ADMIT.And with him in power we are prostituted not only to the apartheid Rothschild state of Israel but to the Zionist ands Jewish Lards of London as well just as are British commoners !.

OpEdNews - Article: When the CIA Overthrew Iran for British Petroleum

www.opednews.com/.../When-the-CIA-Overthrew-Ira-by-Bill-Hare-1...
May 11, 2010 – Article: When the CIA Overthrew Iran for British Petroleum - In 1953 the CIA overthrew a popularly elected government in Iran to benefit the ...


Iran, BP and the CIA » Counterpunch: Tells the Facts, Names the ...

piazzadcara.wordpress.com/.../bp-cia-their-role-in-1953-iran-coup/
Oct 1, 2012 – Reblogged from Dogma and Geopolitics: Interesting interview linking BP, the CIA, and the rise of modern terrorism in the Middle East. 60 years ...

Attack 'mastermind' Mokhtar Belmokhtar, who worked for the CIA in Afghanistan.
Was the January 2013 Algerian hostage crisis an 'inside job', designed to get more NATO troops into Africa, to control the mineral wealth?

1. Some of the so-called Al Qaeda terrorists 'were working for BP'.


2. Witnesses have described one terrorist as speaking with a 'perfect English accent'.

3. A report in Norway's Aftenposten said one of the attackers was tall and white with blue or green eyes.

4. Professor Jeremy Keenan of the School of Oriental And African Studies told The Huffington Post UK that Mokhtar Belmokhtar has very close links to the secret intelligence services.


The UK prime minister has heralded the start of a decades-long struggle involving (CIA-run) Islamist terrorism in Algeria and beyond.


Cameron said the attack was a “stark reminder” of the continuing (CIA-NATO-run) terrorism and vowed to use Britain's chairmanship of the G8 to ensure that it was right at the top of the international agenda.

“What we face is an extremist, Islamist, (CIA-linked) terrorist group. Just as we had to deal with that in Afghanistan (source of our heroin) so the world needs to come together to deal with this threat in north Africa (where there is lots of oil and gas)." 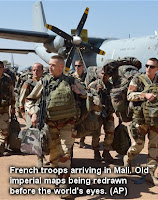 According to Tony Cartalucci (By Design: French Mali Invasion Spills into Algeria)

Algeria, which has lots of oil, is now being targeted by NATO.

"As far back as August of 2011, Bruce Riedel out of the corporate-financier funded think-tank, the Brookings Institution, wrote Algeria will be next to fall, where he gleefully predicted success in Libya would embolden radical elements in Algeria, in particular AQIM.

"Between extremist violence and the prospect of French airstrikes, Riedel hoped to see the fall of the Algerian government.

"Algeria has expressed particular concern that the unrest in Libya could lead to the development of a major safe haven and sanctuary for al-Qaeda and other extremist jihadis.

"And thanks to NATO, that is exactly what Libya has become – a Western sponsored sanctuary for Al-Qaeda.

"AQIM’s headway in northern Mali and now French involvement will see the conflict inevitably spill over into Algeria.

"It should be noted that Riedel is a co-author of “Which Path to Persia?” which openly conspires to arm yet another US State Department-listed terrorist organization (list as #28), the Mujahedin-e Khalq (MEK) to wreak havoc across Iran and help collapse the government there – illustrating a pattern of using clearly terroristic organizations, even those listed as so by the US State Department, to carry out US foreign policy".... 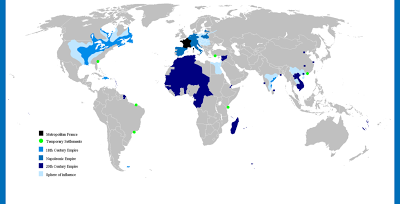 Image: The French Empire at its height.

"The regions that are now Libya, Algeria, Mali, and the Ivory Coast all face reconquest by the French and Anglo-Americans, with French troops literally occupying the region and playing a pivotal role in installing Western-friendly client regimes.

"Also notice Syria too, was a French holding – now under attack by US-British-French funded, armed, and backed terrorists – the same terrorists allegedly being fought in Mali and now Algeria.

"Meanwhile, these very same terrorist forces continue to receive funding, arms, covert military support, and diplomatic recognition in Syria, by NATO, and specifically the US and France who are both claiming to fight the “Free Syrian Army’s” ideological and very literal allies in North Africa.

"In reality, Al Qaeda is allowing the US and France to intervene and interfere in Algeria, after attempts in 2011 to trigger political subversion was soundly defeated by the Algerian government.

"Al Qaeda is essentially both a casus belli and mercenary force, deployed by the West against targeted nations. It is clear that French operations seek to trigger armed conflict in Algeria as well as a possible Western military intervention there as well, with the Mali conflict serving only as a pretense."
Posted by Anon at 8:47 AM 1 comment:

Email ThisBlogThis!Share to TwitterShare to Facebook
Posted by Tony Ryals at 7:47 AM