"Yeah that's true, that's real," Raz told MTV News with a bit of a frog in his throat on January 20 when he came to New York to announce his partnership deal with Lyor Cohen, Todd Moscowitz and Kevin Liles' new label, 300.-mtv.com

6 days ago - Rapper Raz Simone is accused of being a 'warlord' within Seattle's ... gun-owners to guard the area and allegedly assaulted a protester for ...

The Story of Lyor Cohen: Little Lan$ky and the Big Check ...

How the Israeli-raised president of Island Def Jam Records became one of the most important men in hip-hop, and why he may now become one of the most important men in rock & roll
Jun 21, 2001 - Bored, he followed a flier to one of the first rap shows on the West ... He was born in New York, where his father, an Israeli, worked in the consulate. ... When Cohen's mother remarried, to a psychiatrist, Lyor moved in with them

RAZ SIMONE TELLS CHILLING REAL-LIFE STORY BEHIND 'KIDS THROW ROCKS' NEWCOMER RAZ SIMONE OPENS UP ABOUT THE RAPE HIS MOTHER SUFFERED AT THE HANDS OF HIS FATHER.


"Yeah that's true, that's real," Raz told MTV News with a bit of a frog in his throat on January 20 when he came to New York to announce his partnership deal with Lyor Cohen, Todd Moscowitz and Kevin Liles' new label, 300.
"That was my dad and my mom. My mom was a virgin, so that's what happened," he continued to explain. "They were friends for a little bit and then, you know, that was that."

Solomon Samuel Simone (aka Raz from CHAZ or CHOP) is the proclaimed warlord of CHAZ, the multi-block area located in Seattle. Raz reportedly owns luxury automobiles and millions in real estate, and even received a grant for $82,000 from the city of Seattle to open his own studio. He also owns multiple guns, including six semi-automatic guns and an Uzi. He was caught on video handing out long guns to Antifa members from the trunk of his car. Curiously, Raz also is supported by the Islamic government in Dubai. -GEG

More importantly, Raz is supported by the Islamic government in Dubai.

The leader of CHAZ, Warlord Raz Simone was previously identified running guns in the newly formed country in the center of Seattle.  Today we have more on RAZ thanks to the work of Yaacov Apelbaum.
Raz the warlord, doesn’t only run guns, he owns guns.  Raz owns a couple of handguns, which were somehow ‘restored’ through a special intervention after a conviction.
Raz also owns six semi-automatic rifles, including an AR-15 and AK-47 and an Uzi.
He has armor piercing bullets for these guns as well.
Raz somehow received a grant for $82,000 from the city of Seattle to open his own studio in a building he purchased with another loan.
And Raz owns multiple luxury cars, including a Tesla, a BMW and a Jaguar XJ.
He also owns some prime real estate and rental properties.
He owns the RAZ fashion line, the Aurora Smoke Shop, a social club called “The Spot”, the Black Umbrella Corporation. All this came from funding in sweetheart deals.
Read full article here…

▶ 18:50
Kalen D'Almeida from Scriberr was filming Raz Simone, the alleged warlord of the autonomous zone, when he ...

7 hours ago - Uploaded by America Uncovered

Posted by Tony Ryals at 5:34 PM No comments:

Email ThisBlogThis!Share to TwitterShare to FacebookShare to Pinterest
9/11,CIA,𝚂𝚝𝚎𝚟𝚎 𝚂𝚊𝚛𝚗𝚘𝚏𝚏,Agora-Inc.Airline-Options Hotline and 9/11

In the investigations following 9/11, the SEC determined that an unusual number of investors had purchased put options on American Airlines immediately prior to September 11, 2001. Further investigation found Agora's Options Hotline newsletter and its editor Steve Sarnoff as responsible for faxing some 2,000 subscribers the recommendation to buy put options on American Airlines on September 9, 2001.[43] Sarnoff was investigated for insider trading with the SEC eventually concluding “all suspicious trades were checked out, and the SEC satisfied itself that the traders had no advance knowledge of 9/ll.”[44]

29 The leak connecting the pre9/11 purchase of put options to Krongard and A.B. ... that faxed its 2,000 subscribers a recommendation to buy put options on American Airlines ... Also see http://imgur.com/a/MPDpN The newsletter was Steve Sarnoff's Options Hotline, published by a Baltimorebased company known as Agora ...

May 25, 2016 - United Airlines stock fell even more, a whopping 44%. ... On the day prior to 9/11, the purchase of call options for Raytheon had ... In 1999, BT Alex Brown was in turn acquired by Deutsche Bank, the firm that placed the UAL put options. ... also named Agora, one of whose founders, the late Gregory Barnhill, was a protégé and close associate of Buzzy Krongard. (Barnhill reportedly committed suicide in 2012.) .....
Posted by Tony Ryals at 11:06 AM 1 comment:


Obama admitted years ago he was born in Kenya .Harvard commited-treason to to cover cover up records but overlooked his his Harvard Review admission and 1991 Acton & Dystel literary agency book promotion.

Obama siblings tear each other apart over former US President’s place of birth
By Nahashon Musungu June 16th, 2020


Fact: In 1990 Obama was elected the first black president of the Harvard Law Review, a student publication featuring analysis of important legal matters. The review’s student yearbook includes a biography of Obama, stating “born in Kenya, raised in Indonesia and Hawaii.”
Fact: In 1991 Obama hired a literary agency, Acton & Dystel, to help promote sales of his upcoming book, “Dreams of My Father.” The agency published a promotional booklet listing its 90 client/authors, including Obama. His biography states “born in Kenya, raised in Indonesia and Hawaii.” Twenty years later an Acton & Dystel employee claims she wrote Obama’s biography but neglected to fact check it. What are the odds that two individuals would have both mistakenly chosen Kenya as Obama’s country of birth? I find it impossible to believe that an author would not write their own biography.
Obama believed it was to his advantage to promote himself as a foreign born, man of the world … until it wasn’t. When he decided on a political career, he needed to be U.S. born to get elected......

Retired US President Barack Obama with his half brother Malik Obama at Oval Office in White House on April 16, 2014. PHOTO | FILE
The Obama family in Kenya is at war on Twitter.
It all started when former US President Barack Obama’s half  brother Malik, whose decisions within the family are known to go against the grain, posted what appeared to be a birth certificate suggesting his famous brother was born in Kenya.
The document, titled ‘Certified Copy of registration of Birth’ indicates one Barack Hussein, was born at the Coast General Hospital in Mombasa, to Barack Hussein Obama aged 26, who listed his profession as a student, and 18-year-old Ann Dunham from Kansas City, in the US.
The document indicates the said Barack was born on August 4, 1961. 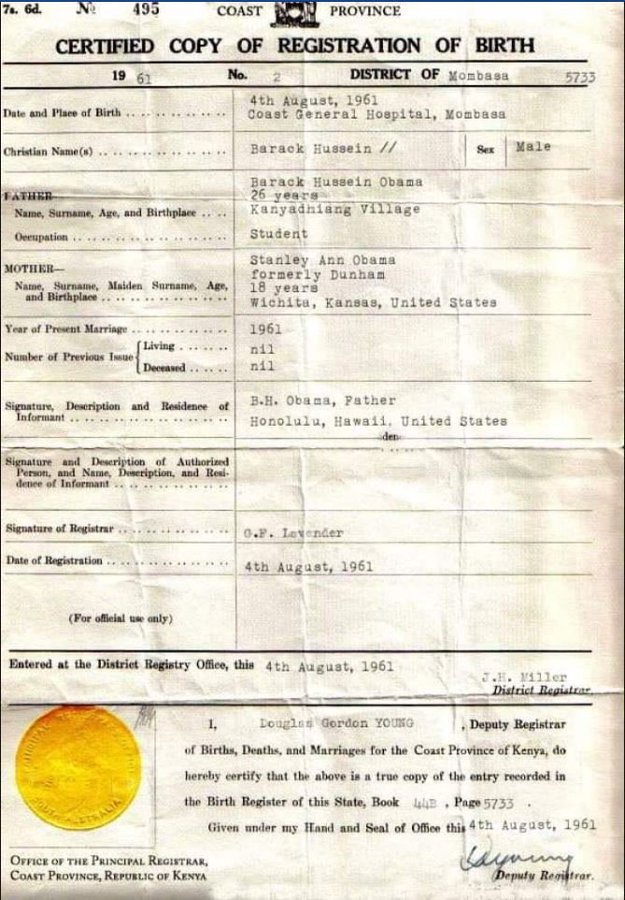 39.8K people are talking about this


But in a swift response Malik’s younger sister Auma blasted him for being ‘bitter’ and ‘jealous’.
An angry Auma, who is particularly close to Barack, minced no words as she took her controversial elder brother head on.
“You are blindly consumed by jealousy and bitterness that you will go to any length to slander your younger brother’s name – literally! Just because he has outshone you in every single aspect of his life. Seek relevance elsewhere big brother!” Auma tweeted.

So blindly consumed by #jealousy and #bitterness that you will go to any length to slander your younger brother’s name - literally! Just because he has outshone you in EVERY SINGLE ASPECT of his life. Seek relevance elsewhere big brother! https://twitter.com/obamamalik/status/1272621685859127297 …

3,152 people are talking about this


In another tweet, Auma chided her elder brother for being a turncoat while reminding him how many years ago before Obama became president, Malik embraced and welcomed him when he visited the family’s ancestral home in Kenya.

Long before he even knew he would be president my little brother visited his fatherland and was embraced by all!!! Malik you took centre stage in welcoming him!!!https://youtu.be/4Ptts3Wx_ac  https://twitter.com/aumaobama/status/1272780893917233154 …

Auma Obama@AumaObama
So blindly consumed by #jealousy and #bitterness that you will go to any length to slander your younger brother’s name - literally! Just because he has outshone you in EVERY SINGLE ASPECT of his life. Seek relevance elsewhere big brother! https://twitter.com/obamamalik/status/1272621685859127297 …

119 people are talking about this


Even exiled Kenyan politician Miguna Miguna has been sucked into this family feud, although he is clearly on Barack’s side.

1,037 people are talking about this


If this document is legit, it would raise questions about Barack Obama’s nationality, and consequently his his decision to vie for the Senator and Presidency of the United States of America.
He won the two political seats which are exclusively reserved for American citizens.
The Kenyan law makes one a citizen automatically at birth in the country, and considering there was no dual citizenship at the time, it means Barack Obama who is married and has two kids in the USA, would have to change citizenship to qualify to vie in the USA.
The development comes days after Malik backed Deputy President William Ruto for the presidency in 2022.
Posted by Tony Ryals at 1:41 PM No comments: