Conspiracy...
by Tony Ryals
The Jews are in control,
The Japanese are too,
They're out to get me and they're out to get you,
The Arabs got the oil,
They're gonna grab your soil,
The Bushes are taking over,
You better run for cover,
The CIA has got one over all,
They're still partying without a budget and waiting for the fall,
The Mexicans are still sneakin' across the border,
They got a plan,
To steal our land,
And get rid of law and order,
Then there's the Blacks in the ghettos,
Driving down land values,
Conspiracies, conspiracies, sometimes
I wish they were true,
That would mean someone was in control --good news for me and you,
But the biosphere's still dying,
The homeless are still crying,
Our leaders have no soul,
And no one's in control.


Paradoxical that in many ways thanks to the 'white jewish' financial military industrial 'German Jewish' Rothschild crime families rise to power in old England after financing the first and then the the second  defeat of Napolean at Waterloo Belgium in 1815 that non British 'white jews' or 'German Jews are now 'in control' of the finances and technolgy of the country that started the 'industrial revolution' that in the end led to the petroleum and nuclear era that ow threatens to tear old England and the rst of the world apart. Just as withfinal rise  rise and collapse of the Mayan civilization in Meso-America particularly the Guatemala jungles of the Peten and extending north inyto what is Mexico and south to what we now call Copan  in Honduras the collpse I beleve mainly to over population and soil exhaustion came around 800 A.D. of the so-called Christian Era.
This type of collapse due to over population and soil exhaustion happened over and over again at different places particulary Eur-Asia at various times in world history.In the Tigris Eurphrates in what is now Iraq and even Palestine as well as later in Greece and even Rome that despoiled its own nest and own soil even though its non industrial miitary empire robbed and looted the soil resources for many miles or kilometers around their own city states.
But the very industrial system that led to burning fossil carbon to move iron machinery first for pumps to drain water from the  British coal mines that then  started the industrial revolution by converting that steam pump technology to create steam engines to move locomotives of railroads and steam ships and then the first oil well in Pennsylvania in the 19th century that would lead to locomotion for autos and run turbines for
the generation of electricity,etc, would also provide the energy and infrastructure to mine for the first time the elements of life or fertilizers such as phosphates in Florida and now the former Spanish Sahara and potassium from Canada to temporarily post pone our own soil collapse as human population nowc grow not from the soil itself anymore or collapse due to its de´letion,but from mining fertilizer to subsidize or replace the very soil that would o9therwise have collapsed long ago before our population reached anything near 7 billion 'souls.Thus was a legacy of chemists such as the Greman 'father of modern agriculture' Justis Von Liebig whose concept called 'Liebig0s Minimum' stated that life neded a minimum of nitrogen,phosphate and potassium for plants to grown and fix carbon dioxide of the air into the carbon molecules of life with solar energy.This discovery overly simplistic or not was really the collapse of Aristotle's qand the Catholic Church's 'four element' or 'earth,air,water and fire. concept of the earth's make up and led to large mining operations and industrial nitrogen manufacture from the atmosphere's nitrogen make up.
More recently would come the use of fossil fuels to mine uranium and crete the nuclear age using that petroleum and coal to make more iron and cement and transport it to sites around urbaan areas to build nuclear electricity generating plants.Well white people who claim to be 'Jews' or just keep on lieing about it out of centuries of habit may think they are in control of the City of London and or the world but these are just delusions of grand manure and their very leadership position only proves their own delusions and as elements of life and the environment that that life depends upon slides further out of control leaving an environment only fit perhaps for organisms such as bacteriam,cockroachesand perhaps rats(maybe they'll be the new 'jews' or 'christians' or muslims' or 'mormons)),who have a genetic´ropensity tro survive and perha´s thrive in the human sewer and ´lastic ocean we bequeath to these meek and humble organisms.
to be continued.... 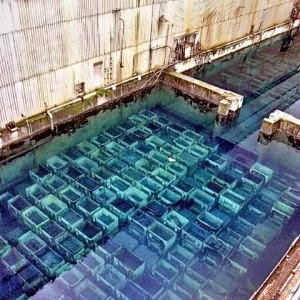 Above we see a nuclear waste pond at Sellafield, in North West England.

"The fuel and sludge in the ponds could spontaneously ignite if exposed to air, spreading intense radiation over a wide area."

Cumbria and Dumfries and Galloway have three sites with dangerous nuclear connections.

Nuclear expert John Large says "It's not for me to make comparisons with Chernobyl or Fukushima, but it could certainly cause serious contamination over a wide area and for a very long time."

by Tony Ryals
It started out in England,
On a coal seam that seemed to have no end,
And had repercussions neither Adam
Smith nor Carl Marx could comprehend,
And while we fought over the delusions
of communism and capitalism - it grew,
It was industrialism that always united the two,
Now we pump oil from the earth,
And mine fossil fertilizer to give us birth,
As Bob Dylan said, "None of them along the line
know what any of it's worth",
Fossil carbon is burned, and metal is turned,
just as in England in the 18th century,
We continue with our entropy,

This basic technology,
Is still our philosophy,
Not communism or capitalism,
This technology so noble,
Even built Chernobyl,
Fossil carbon is burned,
And metal is turned,
This addiction now to oil,
Takes us more to foreign soil,
This world industrialism,
Is a new colonialism,
That can only lead to schism,
Strategic minerals outside our boundaries,
Lead o geopohtical quandaries,
Yet we go on squandering

What we should be monitoring,
Fossil carbon is burned and metal is turned,
Giving more power to the industrialists- we call it free trade,
Only magnifies mistakes we've already made,
China now rips coal from the ground as fast as it can;
Mexico pumps oil to ship to Japan,
The rest of Asia and South America have the same plan,
It ain't communism or capitalism - its industrialism,
It builds freeways for our cars,
And computers for our wars,
General Eisenhower's military industrial complex,
Remains our Frankenstein - our Tyrannosaurus Rex,
Those who would say we're in a post industrial society,
Should be tested for sobriety,
Or at least show a little more piety,
To their big, unstable brother - industrialism,