Frank McDonough has written: The Gestapo: The Myth And Reality Of Hitler's Secret Police.

The Gestapo: The Myth and Reality

Many of the Germans who joined the Gestapo had been detectives in the pre-Nazi German police force.

After World War II ended, 40% of the Gestapo were re-employed in the police force, eventually receiving full state pensions.

Most of the top people in the Gestapo were middle-class law graduates, some with doctorates.

Hugh Thomas' 2001 book The Unlikely Death of Heinrich Himmler provides evidence that the 'Himler' who died in British custody in 1945 was not the real Himmler.

There is evidence that Himler was allowed to escape.

MI6's Kim Philby and Anthony Blunt, both of whom had links to Victor Rothschild, were reportedly involved in a cover-up.

(The Zionists are in bed with the Nazis)

The Gestapo's Eichmann was Jewish.

We should not forget that the top people who run al Qaeda, ISIS and Saudi Arabia are reportedly crypto-Jews. 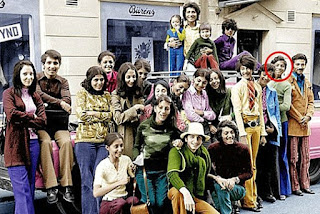 According to Frank McDonough in The Gestapo: The Myth And Reality Of Hitler's Secret Police:

The Gestapo: The Myth and Reality

These are the tortures that are currently used by the US military.

Many of the top Nazis were sadistic homosexuals.

The Gestapo smashed people to pulp.

"In a dungeon, a terrified, naked prisoner would be handcuffed to an iron bar hung on chains from the ceiling.

"A guard then shoved him off in a slow arc and, at each return, another guard smashed his buttocks with a crowbar...

"The blows continued until only a mass of bleeding pulp remained...

"In the end a sack of bones and flayed flesh and fat was swept along the concrete floor and dragged away."

Many of the victims of the Gestapo were Christians.

There were groups of working-class teenagers, 'the Pirates', 'the Navajos' and 'the Raving Dudes', who opposed the Hitler Youth.

In 1944, in Cologne, the Gestapo publicly hanged 13 young members of these teenage groups.

Outside a courthouse in Omaha, Will Brown, after being mutilated and burned. Brown was almost certainly innocent of the crime of which he had been accused. Cached . EXECUTED KID WAS INNOCENT

According to Frank McDonough in The Gestapo: The Myth And Reality Of Hitler's Secret Police:

After World War II, many thousands of members of the Gestapo escaped punishment.

There was no major trial of the members of the Gestapo.

Dr Werner Best, the head of Gestapo administration, spent only a few short years in jail and then got himself a top job with a top German company.

In post-war Germany, about half of the former Gestapo officers became civil servants, and most of the very top Gestapo officials returned to their jobs as lawyers.
Posted by Tony Ryals at 1:15 PM