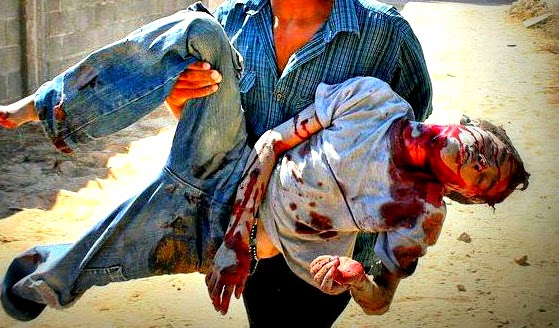 The Financial Times says that it is time to prosecute certain soldiers.

Sander Thoenes was murdered in oil-rich East Timor, in September 1999.

What the Financial Times does not say is that the killers of Sander Thoenes had the support of the US military.

In 1999, the Pentagon gave its warm support to the soldiers and militias who were committing genocide in East Timor.

The USA's Admiral Blair was a friend of the killer generals.

All the Indonesian killer generals were trained in the USA.

A UN-led investigation named the Indonesian officers who killed Sander Thoenes, but, the officers were not prosecuted. 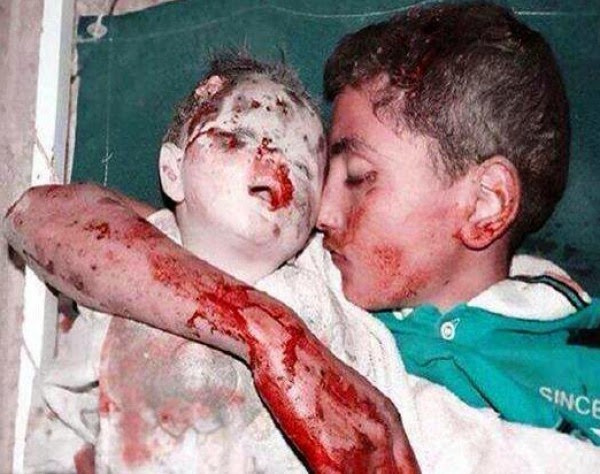 And the murderous Israeli generals will not be prosecuted, because they have the support of the Pentagon and NATO.

The invasion of East Timor in 1975, which led to the murder of one third of the population, was supported by the Pentagon.

When the CIA put Suharto into power in 1966, around one million Indonesians were murdered.

The CIA gave the Indonesian military lists of people who were to be murdered.

The Financial Times's Sander Thoenes was not the only journalist to be murdered by the Indonesian military and its American friends.

The Balibo Five were a group of journalists based in the town of Balibo in Portuguese Timor (now East Timor).

They were were killed on October 16th, 1975 by Indonesian troops who were preparing for the illegal invasion of East Timor on December 7th 1975.

The journalists who knew too much about the Pentagon plans were 1. Australians, Greg Shackleton and Tony Stewart, ( reporter and cameraman for HSV-7 Seven Network in Melbourne), 2. Britons, Brian Peters and Malcolm Rennie, 3. A New Zealander, Gary Cunningham, working for TCN-9 Nine Network in Sydney.

The Indonesian military said the journalists were 'communists'. 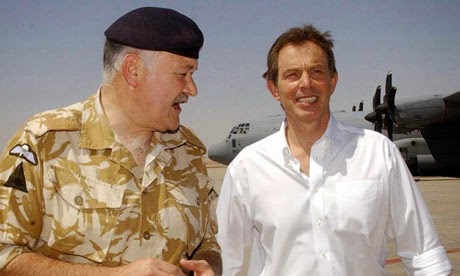 UK's 'warrior generation' could be sent back to Afghanistan by Britain's WAR CRIMINALS.

A witness to the killing of five journalists in Balibo, East Timor, in 1975 has died in Dili, months before a new inquiry by the NSW Coroner.

Olandino Maia Guterres publicly accused former Indonesian minister Yunus Yosfiah in 1998 of having ordered the deaths of the five television journalists after they filmed an attack on the border town of Balibo.

He told the ABC's Foreign Correspondent program that from a distance of less than 20 metres he heard Yosfiah give the order to shoot the men as they tried to surrender, and that he also saw him fire shots at them. 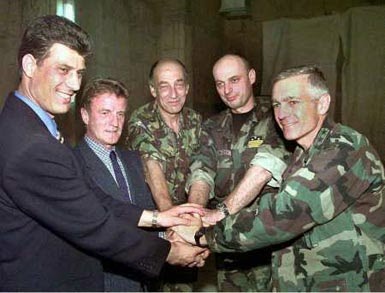 General Wesley Clark (right) directed the NATO bombing of Yugoslavia "with an almost sadistic fanaticism. Clark would rise out of his seat and slap the table, saying 'I’ve got to get the maximum violence out of this campaign - now!' William Blum. General Wesley Clark, who commanded the NATO attack on Serbia, is heavily invested in the Kosovo mineral sector. www.lewrockwell.com

In the early daylight hours of 16 October 1975, military forces under the command of Indonesian officers attacked and entered the village of Balibo in East Timor.

Shortly after entry, five Australian based journalists - Greg Shackleton, Tony Stewart, Malcolm Rennie, Gary Cunningham and Brian Peters - who had lodged themselves in a house in Balibo, were murdered.

Shackleton, a TV journalist with Channel 7, had joined forces with the Channel 9 crew to expose the injustice of the Indonesian invasion.

If they could reveal the truth, then international pressure might stop further atrocities...

In January 1997, the Melbourne Herald-Sun published photographs of a secret funeral - purporting to be that of the five journalists - in Jakarta in 1975.

There was only one coffin.

To this day, the Australian government have made no formal public complaints or launched an official enquiry.

It has since been revealed that senior officials conspired to cover up the details of the murders.

Furthermore, there is plenty of evidence that Australian government officials knew that the journalists were in danger and failed to warn them.

Shackleton's wife, Shirley, has campaigned in vain for the truth for the last 25 years.

In 1989, she managed to reach Balibo to plant a tree in Greg's memory.

'As I knelt saying a few words to Greg,' she said, 'the most wonderful singing washed over me.

'On the other side of the road, a young people's choir started up.

'They had timed their practice to my being there.

'I shall never forget those voices. They came through the barrier the Indonesians had set between us, and they comforted me. They will never be defeated.'

For further details of Australian complicity with Indonesia, click here.

THE CIA, CHRISTOPHER BOYCE AND AUSTRALIA ...
Posted by Anon at 01:28 2 comments:

NDTV is an Indian news channel, apparently not yet controlled by Jews.

The Israelis carry out most of the terror attacks in India.

The Israelis are Nazis and thus have a lot of support among racist right-wing Hindus.

"We in the West have received a huge wake-up call that our politicians are all completely beneath contempt, bribed and blackmailed by World Jewry to the point of incomprehensible corruption."

The Kosher Nostra is essentially a criminal organisation run by the elite.

The Kosher Nostra and its friends planned World War I, in part to get Palestine removed from the Turkish Ottoman Empire.

Himmler - partly Jewish. The Zionists are in bed with the Nazis

Hitler and his friends were part Jewish.

The Kosher Nostra and its friends planned 9 11, in part, to get Americans to hate the Moslems.

The Kosher Nostra and its friends planned the Arab Spring to weaken Egypt and other Arab countries.

During the 1980s there were new discoveries in archaeology.

The story of the 13th century BC exodus from Egypt into the PROMISED LAND was shown to be a myth.

Moses could not have led the Hebrews out of Egypt into the Promised Land, because the Promised land was Egyptian territory at the time.

The archaeologists say there is no trace of either a slave revolt against the Egyptian empire or of a sudden conquest of Canaan by outsiders.

Nor is there any trace or memory of the Biblical kingdom of David and Solomon.

According to a Report by The Church of Scotland:

The inheritance of Abraham - A report .

"Biblical promises about the land of Israel were never intended to be taken literally, or as applying to a defined geographical territory, the report argued...

"Biblical promises about the land of Israel are a way of speaking about how to live under God so that justice and peace reign, the weak and poor are protected, the stranger is included, and all have a share in the community and a contribution to make to it.

"The 'promised land' in the Bible is not a place, so much as a metaphor of how things ought to be among the people of God.

"This 'promised land' can be found - or built - anywhere."

The Israeli Ambassador commented negatively on the report.

Representatives of the Scottish Council of Jewish Communities, the Board of Deputies of British Jews, the Movement for Reform Judaism, and Rabbis for Human Rights held a meeting with the Church of Scotland.

At this meeting, it was agreed that the report would be withdrawn and revised

Assessing the Kirk's report on theologies of land in the ... - Ekklesia

The revised version was debated at the Church of Scotland's annual General Assembly in Edinburgh.

Rev Sally Foster-Fulton said: "This is primarily a report highlighting the continued occupation by the state of Israel and the injustices faced by the Palestinian people as a consequence.

"It is not a report criticising the Jewish people. Opposing the unjust policies of the state of Israel cannot be equated to anti-Semitism. "

The revised report was overwhelmingly accepted by the Assembly.

In 2010, there was debate in the Church of Scotland about the possibility of boycotting Israeli goods.

The Rev Ian Galloway withdrew the proposed boycott call as a result of the threat to the Church’s work in the region from Israeli laws designed to make boycott calls illegal.

"The General Assembly 'may take this legislation to be intimidatory', said Mr Galloway, adding sorrowfully: 'We are intimidated.'"

Assessing the Kirk's report on theologies of land in the ... - Ekklesia

On that day the LORD made a covenant with Abram and said, "To your descendants I give this land, from Seattle to Orlando and from Boston to Los Angeles - the land of the Apache, the Huron, the Blackfeet...."

The Palestinians are most likely the original Jews.

Most of the Jews in Israel are not the original Jews of the Bible, but people who converted to the Jewish religion.

Most of the Jews in Israel are descended from people in countries such as Germany, Georgia, Ukraine, Yemen, and Morocco who were not originally Jewish.

The Palestinians are most likely the original Jews.

Schlomo Sand, professor of history at Tel Aviv university, wrote about the Zionist myth at Le Monde Diplomatique, in September 2008.

Palestinians - who probably converted from the Jewish religion to Islam.
Among the points made by Professor Sand:

1. In 70 AD, the Jews were allegedly exiled and went to live in countries such as Yemen, Morocco, Spain, Germany, Poland and Russia.

2. At the end of the 19th century, people claiming to be Jews began to talk about setting up a Jewish state.

The 'Jews' who invaded Palestine were terrorist gangsters from places such as New York, Warsaw and Belarus.

3. Is the Bible historically accurate?

They saw the stories of the Old Testament as being useful parables.

Victim of an Israeli rocket.

4. During the 1980s there were new discoveries in archaeology.

It is worth repeating this.
The story of the 13th century BC exodus was shown to be a myth.

Moses could not have led the Hebrews out of Egypt into the Promised Land, because the Promised land was Egyptian territory at the time.

The archaeologists say there is no trace of either a slave revolt against the Egyptian empire or of a sudden conquest of Canaan by outsiders.

Nor is there any trace or memory of the Biblical kingdom of David and Solomon.

Many of the Nazi leaders were part Jewish.

5. The Kingdom of Israel was a tiny little place.

The Romans never exiled any nation from anywhere on the eastern seaboard of the Mediterranean.

The Jewish population of Judea continued to live on their lands after 70AD.

Some converted to Christianity in the 4th century, while the majority became Moslems during the 7th century.

Most Zionist thinkers were aware of this.

Both stated on several occasions that the Palestinians were the descendants of the Jewish inhabitants of ancient Judea.

So, the Palestinians are the real Jews.

7. So, what about the people in Europe and elsewhere who claimed to be Jews?

From the 2nd century BC onwards, many people were forcibly converted to the Jewish religion.

Many Europeans, Africans and Asians were converted to Judaism.

For example, in the 1st century AD, in Kurdistan, there was the Jewish kingdom of Adiabene.

In the 5th century, in Yemen, a Jewish kingdom emerged.

Israel tries to control the politicians.
8. In the 8th century, the most important mass conversion took place.

This was in the huge Khazar kingdom between the Black and Caspian seas.

Judaism spread from the Caucasus into the Ukraine, then into Eastern Europe, and on to Germany.
The Yiddish culture of Europe involved people who had converted to the Jewish religion.

9. The Israeli forces who seized Jerusalem in 1967 may have been descendents of Germans, Yemenis, Berbers and Khazars.

At Haaretz, on 21 March 2008, Ofri Ilani wote about shattering a 'national mythology'.

Ilani refers to Dahia al-Kahina, a leader of the Berbers in the Aures Mountains.

Al-Kahina was the daughter of a Berber tribe that had converted to Judaism.

According to the Tel Aviv University historian, Prof. Shlomo Sand, author of "Matai ve'ech humtza ha'am hayehudi?" ("When and How the Jewish People Was Invented?"), the queen's tribe and other local tribes are the main sources from which Spanish Jewry sprang.