Israel Military Training In Over A Dozen  African Nations - Murdred Thousands of Innocent -They Also' trained Uganda Mass Murdrer Idi Amin directly in Israel and sold him weapons tov do the deed and Guatemalan military  In 1980's and manufactured and sold all the Galil rifles and bullets that killed innocent Mayan families under false accusation of being 'communists and all the weapons to Argentine military to kill and rape and torture and steal the babies of Argentine women in 1970's terror in Argentina while pretending they were ant-Jewish and Pope Franis who covers it up should be forced to testify against them and repent !
The real goal is to steal more bloody diamonds and whatever other mineral resources they can to pay
for their 'services'. 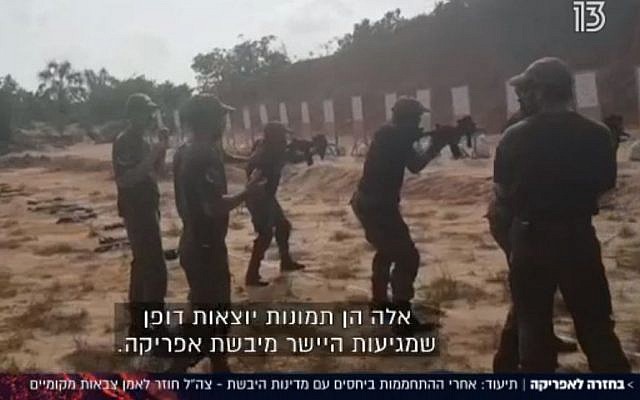 Israel Defense Forces commandos are reportedly training local forces in more than a dozen African nations, part of a broad strategy by Israel to boost its diplomatic ties in the continent.
According to a Sunday Channel 13 report, which showed footage of Israeli officers training Tanzanian soldiers in hand-to-hand krav maga, hostage rescue operations and urban combat, there has been a dramatic upsurge of military cooperation with African nations
This is a direct result of Prime Minister Benjamin Netanyahu’s efforts to improve ties with African nations and establish relations with several others, a centerpiece of his foreign policy, the report said

“I’ve been in Africa four times in the last two years, that’s gotta tell you something,” Netanyahu said recently in a speech to American-Jewish leaders. 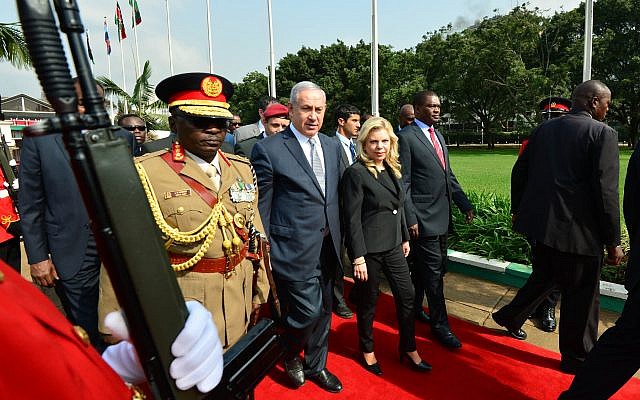 File: Israeli Prime Minister Benjamin Netanyahu and his wife Sara meet with Kenyan President Uhuru Kenyatta and Kenyatta’s wife at the president’s house in Nairobi, Kenya, on July 5, 2016. (Kobi Gideon/GPO)
This includes a combined effort by the Foreign Ministry, the IDF, the Mossad and the Shin Bet security service to boost ties, the report said.
Israel recently appointed Col. Aviezer Segal as its first military attache to Africa in several decades. 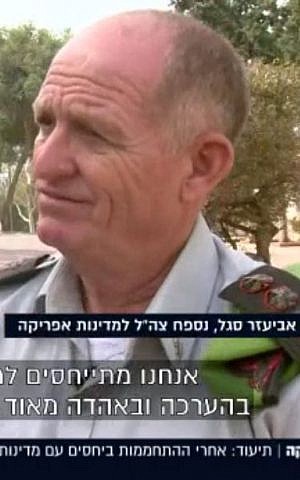 Col. Aviezer Segal (Screencapture/channel 13)
“We treat African leaders with respect and appreciation and deal with them as equals, in a language of true camaraderie, personal friendship and professionalism,” said Segal, who is responsible for military ties with several nations.
Asked about making sure that the soldiers being trained were not using their new skills to oppress or carry out atrocities, Segal noted that they were mostly being trained in krav maga, shooting skills and hostage rescue situations.
Among the countries that Israel was cooperating with were Ethiopia, Rwanada, Kenya, Tanzania, Malawi, Zambia, South Africa, Angola, Nigeria, Cameroon, Togo, Ivory Coast and Ghana, the report said.
It noted that another possible benefit to Israel from this cooperation came from the fact that many of the nations it was training take part in peacekeeping missions on the Israeli borders in Syria and Lebanon. It would be advantageous to Israel, the report said, if these forces were led by Israeli-trained soldiers.
However, the report also noted that Israel has already categorically ruled out working with a number of African nations due to their human rights record. The report said a delegation of Israeli officials has been traveling to countries in Africa and “carefully” weighing requests for further military cooperation. 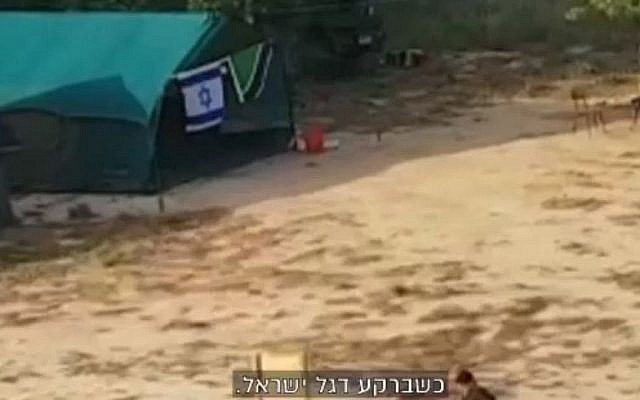 Israeli and Tanzanian flags fly during a traing camp for the Tanzanian military conducted by the IDF (Screen-capture/Channel 13)
Together with the Prime Minister’s Office, the Foreign Ministry, the Mossad intelligence agency and the IDF, the delegation is taking into account how likely Israeli military expertise could be used in committing mass atrocities, the report said.
Also on Sunday, Channel 13 reported the Defense Ministry recently summoned retired Maj. Gen. Israel Ziv for a hearing in light of US allegations he sold $150 million in arms to South Sudan.
At the hearing, Ziv presented officials with the details of what he said was his firm’s agricultural work in South Sudan, and denied that his consulting company Global CST ever dealt in illegal arms.
In December, the US Treasury Department slapped sanctions on Ziv and two others for their alleged roles in South Sudan’s civil war and humanitarian crisis. The US accused Ziv of using Global CST as a cover for approximately $150 million in weapons sales to both the government and the opposition in South Sudan, where ethnically charged fighting has killed nearly 400,000 people. 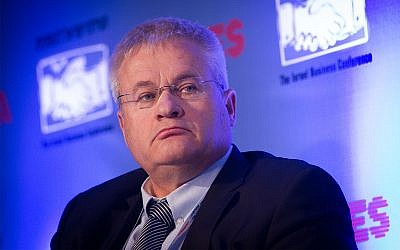 Major General (Res.) Israel Ziv speaks in Tel Aviv, December 06, 2015. (Miriam Alster/FLASH90)
No evidence was produced to support the US allegations against Ziv, the report said.
The Treasury said Ziv also “planned to organize attacks by mercenaries on South Sudanese oil fields and infrastructure, in an effort to create a problem that only his company and affiliates could solve.”
Ziv categorically rejected the US allegations, telling Israel’s Army Radio at the time they were “ludicrous, baseless and completely divorced from reality.”
Posted by Tony Ryals at 11:13 PM