IDF president Menachem Atzmon, for example, then was national treasurer of Likud. A longtime party stalwart, Atzmon was convicted in an Israeli court of ...

Below is a West Virginia GOP poster with a photto collage of Minnesota Muslim Representative Ilhan and the WTC OF SEPTEMBER 11,2001 JUXTAPOSED TOGETHER !

And of course it took Jewish Zionist and petroleum interests inbedded in the W Bush-Dick Cheney regime to act in collusion for the shamjeful despicable terrorist acts of 9/11 to be perpetrated to begin with.And it did destroy the America that e loved for all of us including those who are of Christian as ell as Jewish origens.NO ONE can tell me that my fello Americans of Jewish origens who I have met and learned to value and respect over the years had anything to do with it but certainly Jewish and Christian Zionists who have infiltrated the U.S. government as the CIA,FBI and U.S. military aided and abetted and should still be searched out and convicted and punished !
The very fact that so many years after 9711 THE ZIONIST FAR RIGHT WHO HAVE REFUSED AND DENIED A REAL INVESTIGATION INTO THE EVENTS OF 9/11 CONTINUE TO USE THE INCORRECT OFFICIAL GOVERNMENT  CONSPIRACY THEORY THAT MUSLIMS DID IT IS ONLY MORE PROOF E STILL NEED A REAL INVESTIGATION INTO THE EVENTS OF 9711 to this day !
It was Israeli Menachem Atzmon a member of Netanyahu's own Likud Party and his Mossad connected fellow employees who controlled the security at Logan Airport Boston on that infamous day and he was allowed to incorporate his sham airport security company in Joe Biden's stae of Delaware and sell shares on NASDAQ even though he he previously been convicted of money laundering in Israel !


9/11 Was an Israeli Job, by Laurent Guyénot - The Unz Review

www.unz.com/article/911-was-an-israeli-job/
Sep 10, 2018 - Every Sunday afternoon, New York time, Netanyahu would call Silverstein. ... Israel and headed by Menachem Atzmon, a treasurer of the Likud.


Oct 22, 2010 - (Menachem Atzmon was even involved in an Israeli political scandal ..... that Likudleader Benjamin Netanyahu told an audience at Bar Ilan:.
to be continued


Friday was a day meant to celebrate the Republican Party in the West Virginia Capitol. But a poster connecting a Muslim congresswoman to the 9/11 attacks led to heated emotions, the resignation of at least one staff member and left another reportedly injured when things got physical as the altercation spilled into the chamber of the West Virginia House of Delegates.
The poster, at a table in the Capitol’s rotunda, featured an image of freshmen Rep. Ilhan Omar, D-Minn., spliced next to one of the twin towers burning.
“‘Never forget’ — you said,” the poster read over the World Trade Center.
“I am the proof — you have forgotten,” the caption over Omar’s image said. 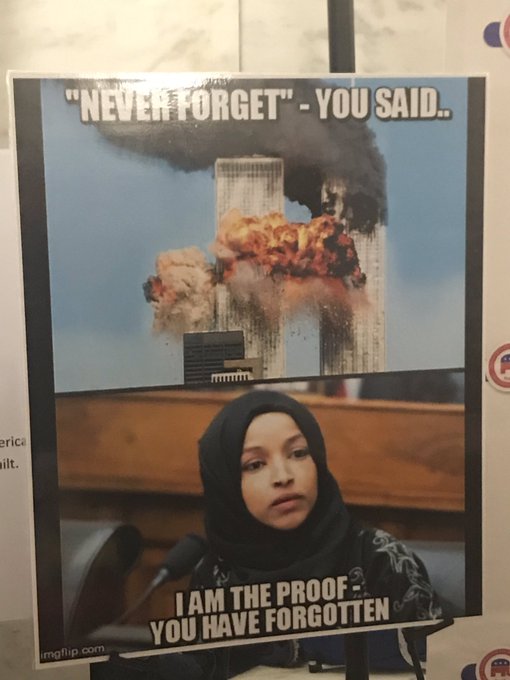 This poster is in your Capitol on a booth sponsored by @WVGOP “When someone shows you who they are, believe them”

Ocasio-Cortez questions criticism of Omar: 'No one seeks this level of ...

The Hill-1 hour ago
Ocasio-Cortez issued a series of tweets a day before the House is set to vote on a resolution condemning anti-Semitism in response to Omar's ...
Ocasio-Cortez defends Ilhan Omar's tweets about Israel
New York Post-10 hours ago
Ocasio-Cortez balks at Dem leadership's rebuke of Omar
International-Politico-51 minutes ago

TwinCities.com-Pioneer Press-16 hours ago
The FBI is looking into a threat against U.S. Rep. Ilhan Omar of Minnesota that was scrawled on a bathroom stall in Rogers and posted on ...
Ilhan Omar's rattling America... but that might be a good thing
City Pages-Mar 4, 2019


IDF president Menachem Atzmon, for example, then was national treasurer of Likud. ... One former Netanyahu associate, who would speak only on condition of ...