BEIRUT - Two bomb blasts ripped through crowds at a rally of peace activists in the Turkish capital Saturday, killing scores, in a reminder of the growing conflicts Turkey faces both at home and across the border in war-torn Syria. 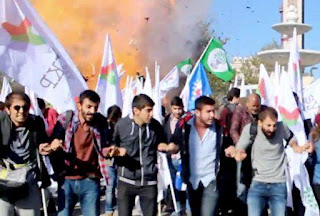 On 10 October 2015, bombs killed scores of people at a pro-Kurdish peace rally in Ankara, in Turkey.

Witnesses said the two explosions happened seconds apart shortly after 10 a.m. as leftists, labour unions and other civic groups, gathered for a march to protest over the deaths of hundreds since conflict resumed between security forces and the Kurdistan Workers Party (PKK) in the mainly Kurdish southeast.

At least 86 killed in twin bombings near train station in Turkey's capital. 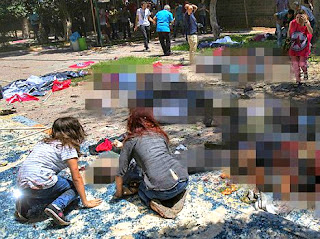 "A whistleblower, Fuat Avni, who has a credible record of predicting police operations and government policies has made a surprising claim, arguing that the Turkish spy agency is planning to blow up crowded areas."

On 20 July 2015, at least 31 people were killed and more than 100 others injured in a powerful explosion at a Kurdish centre in the mostly Kurdish town of Suruc (above) in southeastern Turkey, 10 km from the Syrian border.

The target of the explosion appears to have been Kurdish students.