RT-Apr 22, 2017
This week, NATO's Summer Shield military exercises got underway at the Adazi ... Lithuania, the UK, Luxembourg, Romania, Slovakia, Germany and also .... Trump is US President and Boris Johnson is UK Foreign Secretary.

Neil Clark is a journalist, writer, broadcaster and blogger. He has written for many newspapers and magazines in the UK and other countries including The Guardian, Morning Star, Daily and Sunday Express, Mail on Sunday, Daily Mail, Daily Telegraph, New Statesman, The Spectator, The Week, and The American Conservative. He is a regular pundit on RT and has also appeared on BBC TV and radio, Sky News, Press TV and the Voice of Russia. He is the co-founder of the Campaign For Public Ownership @PublicOwnership. His award winning blog can be found at www.neilclark66.blogspot.com. He tweets on politics and world affairs @NeilClark66
Just imagine if over 1,200 Russian troops were carrying out major military drills over a two week period in Mexico, a country that borders the United States. Would media headlines be warning about “US aggression?” Of course not.
Yet 1,200 NATO troops have been carrying out military exercises in Latvia, the Baltic country that shares a border with Russia. Guess who is being portrayed as the aggressor? You got it: the big, bad Russian bear.
This week, NATO's Summer Shield military exercises got underway at the Adazi military base. Soldiers from Latvia, the US, Bulgaria, Estonia, Canada, Lithuania, the UK, Luxembourg, Romania, Slovakia, Germany and also non-NATO member Sweden are taking part in the drills, which have been held in the country since 2004.
“The US Air Force has sent several of its newest stealth fighters to the UK as part of an initiative to reassure Europe in the face of Russian aggression,” reported the Independent newspaper on Easter Monday.

Over the past few months there’s been a massive military build-up in Eastern Europe by NATO, but all we hear is the same old phrase: "Russian aggression, Russian aggression, Russian aggression." Yet proof is wanting.
Today’s mantra regarding “Russian aggression” is the 2003 equivalent of “Saddam’s Weapons of Mass Destruction,” to be repeated ad nauseum by anyone supporting NATO’s Drang nach Osten. And like the WMD claim, it’s based on zero evidence.
The two examples of so-called ‘Russian aggression’ that hawks routinely cite in order to portray Putin as ‘a threat’ were in fact nothing of the sort. No matter how many times you read the phrase in neocon propaganda pieces, there was no ‘Russian invasion of Ukraine.’ What did occur was that after a Western-supported regime change operation against a democratically-elected government in Kiev, the predominantly Russian population of Crimea (the province where the Russian Black Sea fleet was already based) quite understandably voted overwhelmingly in a referendum to rejoin Russia. If there had indeed been a ‘Russian invasion of Ukraine,’ then the people of Kiev would certainly know about it.
And in Georgia in 2008, it was the tie-chewing Western-backed President Mikhail Saakashvili who started the conflict in South Ossetia. This is not a ‘pro-Russian’ version of events, it’s simply the truth.
As the EU report of 2009 declared, "There was no ongoing armed attack by Russia before the start of the Georgian operation ... Georgian claims of a large-scale presence of Russian armed forces in South Ossetia prior to the Georgian offensive could not be substantiated."
Read more 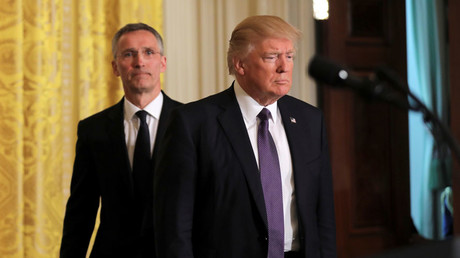 ‘Trump’s U-turn on NATO: Making it more expansionist, rather than more defensive’
Once we reject the claims of ‘Russian aggression’ in Ukraine and Georgia, then the case for regarding Putin as a threat crumbles. We could of course go back further (as neocons indeed do) and talk about events in the Soviet era, such as the invasion of Finland in 1939, but that wasn’t ‘Russia’ and in any case, why do that when we’ve got much more recent examples of invasion and military interventions to look at?
Any fair-minded and objective observer, looking at the history of the past 25 years, would conclude that the worst culprits when it comes to threatening the peace are the NATO powers themselves - not Russia. In horse-racing terminology, when it comes to attacking other sovereign states it’s the US and its allies - not the country led by Vladimir Putin - who have the best form.
In 1999, the Federal Republic of Yugoslavia, which had not threatened to invade anyone, was subject to a 78-day ‘humanitarian’ bombing campaign by NATO. There was no let up on the attack, not even at Orthodox Easter.
In 2001, US and its allies invaded Afghanistan.
Two years later, a US-led coalition invaded Iraq on fraudulent grounds that the country possessed WMDs. In 2011, NATO bombed Libya, the country with the highest living standards in Africa, back to the Stone Age. Its leader, Muammar Gaddafi, was brutally murdered, with US Secretary of State Hillary Clinton gloating, "We came, we saw, he died."
In Syria, NATO powers and their regional allies have been backing jihadist ‘rebels’ to overthrow the government, and have also been bombing the country illegally. In 2015, it was revealed that at least 1.3m people had lost their lives in America’s so-called ‘War on Terror’ in just three countries- Iraq, Afghanistan and Pakistan, between 2001 and the end of 2013.
But hey, let’s ignore all this and keep obsessing about Putin and the ‘Russian threat’ shall we?
Tanks and missiles are not the only weapons that Putin threatens to unleash according to reports. Indeed, we mustn't forget about those super-sexy Russian women. The Copenhagen Post informs that according to a risk assessment from the Danish Defense Intelligence Services, "Russian and pro-Russian agents will do their utmost to discredit the presence of the Danish soldiers and their NATO colleagues in the area – and this will include the use of female operatives."
The DDIS report “revealed that Danish soldiers should be wary of so-called Russian ‘honey traps’ – the use of beautiful women to put soldiers and agents in compromising positions,” as quoted inthe Post.
Read more 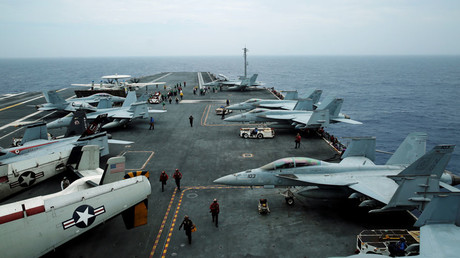 Follow the money trail for source of 'Russian threat' paranoia
You can just imagine Putin getting his battalion of cigarette-holder waving, suspender-wearing "female operatives" ready to ensnare the unsuspecting ‘away from home for the first time’ Danish soldiers in dive bars in downtown Tallinn. I bet out of all his jobs, it’s the one the Russian President enjoys the most.
The talk is of getting soldiers into "compromising positions," but in fact the really dubious positions are the ones held by NATO troops in Eastern Europe. After all, we know that they are not there to deter a Russian invasion of Europe. So what are they there for, apart from being the potential victims of Russian Mata Haris?
There are two explanations. First, promoting a non-existent Russian threat is great news for the military-industrial complex, which dear old Dwight D. Eisenhower warned us about all those years ago. All you have to do to find the source of ‘Russian threat’ paranoia, is, as I explained here, is to follow the money trail
The second reason is even more sinister. Namely that an invasion force is being mustered, much like in 1941. The uber-hawks in Washington know that for the US to attain full global hegemony Russia has to be dealt with. A ‘color revolution’ won’t work in Moscow because the ‘liberal’ politicians the West would love to take power have nowhere near enough public support. A military assault on Russia might be the only way to colonize the country.
Let’s take this scenario. In Britain, PM Theresa May is returned with a thumping 80-seat majority in June’s General Election. President Trump knowing he has a ‘War Parliament’ to rely on in the UK and egged on by the neocons at home, is emboldened to go all-out for regime change in Syria. He calls the UK, who assure him they’re on board for air-strikes against Assad (Note that only this week UK’s gung-ho and utterly bonkers Foreign Secretary Boris Johnson said that Assad needs ‘decapitating’ and that the UK could join in any future US attacks on Syria).
US and UK planes then attack Syrian government positions. Russian planes are destroyed as well as Syrian ones. Russia retaliates by firing at US/UK aircraft. NATO responds by ordering Operation Barbarossa 2.0 in ‘self-defense’. Note in this context that hawks in the US are already talking positively about the ‘limited use’ of nuclear weapons.
If it all sounds far-fetched, then remember, Donald Trump is US President and Boris Johnson is UK Foreign Secretary.
Another variation, and probably the more likely one, is that the Kremlin is warned that if it dares to try and retaliate in Syria against the US or UK, NATO troops would sweep into Russia. In other words, the forces built up in Eastern Europe and the Baltics would indeed be used as a deterrent, but not against Russian ‘aggression,’ as is claimed, but to try and stop Russia defending its allies and its vital strategic interests.
Either scenario is deeply disturbing. The best way to take these options off the table is for citizens of NATO countries to demand their countries stop the military build-up on Russia’s borders. After all, we’re the ones paying for this nonsense, at a time when cuts to vital public services are being made at home. To defuse tensions, demilitarized borders in Eastern Europe, as UK Labour party leader Jeremy Corbyn has called for, are urgently needed.
Reading about NATO’s ‘defensive’ Summer Shield exercises this week reminded me of being back at university in the 1980s. Anyone who studied law in England will know the famous case of Combe v. Combe (1951) in which Lord Denning ruled that promissory estoppel can only be used as a shield and not a sword. We should insist that NATO, which in recent years has most definitely been used as a sword, follows the same rules. And those Danish soldiers in Estonia should enjoy their posting – and any ‘honey-traps’ while they can.
Follow Neil Clark @NeilClark66


'We need to be ready to FIGHT' US general wants MORE troops for ...

Daily Star-May 3, 2017
EUROPE must be “ready to fight” Russia, a US general has warned, as he called for ... Tensions have been raging with Russia ever since President Donald Trump .... troops to Lithuania to participate in this year's Iron Sword exercises. ... Earlier this year, Britain sent troops to Estonia, Poland and Romania.

World War IIIIs on the Horizon

Kasmir Monitor-May 8, 2017
The recent meeting between Donald trump and Chinese president Xi Jinping ... Beijinghas condemned the US military presence in the area and has ... It is the intervention of Russia in the Syrian war which has prevented the invasion of Iran. ... On the other hand US, UK France, Germany and japan have ...

The Guardian-Jan 12, 2017
Russia says US troops arriving in Poland pose threat to its security ... Especially as it concerns a third party building up its military presence near ... But on Thursday Nato officials played down Trump's comments, saying ... increasing air patrols and training exercises in eastern Europe. .... USA · europe · UK.
Why the new US military buildup in Europe doesn't yet worry Russia
International-Russia Direct-Jan 10, 2017

Can We Get the Truth About a Possible North Korea Showdown?

American Free Press-Apr 20, 2017
Will China and Russia rally behind the U.S. military if the U.S. attacks? ... “threats” against the U.S. while the U.S. engages in almost monthly military exercises ... In 2014, The Guardian in the UK exposed many defector stories as false. ... North Korean Vice Foreign Minister Han Song Ryol said the Trump ...

500 US troops arrive in Romania with their tanks

Press TV-Feb 15, 2017
Five hundred US troops have arrived in Romania to allegedly beef ... a Romanian Black Sea port with tanks and military hardware as part ... in different multinational exercises and conduct shooting exercises ... on Tuesday that US President Donald Trump had called on Russia to "return Crimea" to Ukraine.
500 US troops arrive in Romania to bolster defense
Arab News-Feb 14, 2017