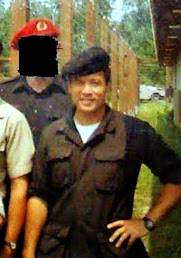 John Bruce Jessen (above) is the CIA psychologist who, with James Elmer Mitchell, created a torture programme designed to turn innocent people into mind-controlled operatives for the CIA.

Bruce Jessen is a former bishop.

Truthout revealed, in 2011, the purpose of Jessen's work for the CIA.

Jessen's Handwritten notes explain that the CIA victims were tortured "to break them down physically and mentally, in order to get them to 'collaborate'."

The aim was to achieve total 'control, dependency, compliance and cooperation.'

Binyam Mohamed, an Ethiopian-born British citizen, was kidnapped by the CIA.

The objective was to turn him, through torture, into an asset of MI6.

All the 'terrorists' are mind-controlled assets of the security services, reportedly.

Ruslan Tsarnaev married the daughter of the CIA's Graham Fuller.

Graham Fuller helped to bring Fethullah Gulen into the USA.

Ruslan Tsarnaev is the uncle of the 'Boston Bombers'.

"Ruslan worked as a 'consultant' for USAID, which is known to be frequently used as a cover for CIA operatives, according to Jeff Stein (SpyTalk) at the Washington Post."

The home of Katherine Russell, the wife of 'Boston Bomber' Tamerlan Tsaraev.

"And both had fast, dramatic and uncharacteristic conversions to a perverted form of Islam favored by the gangster family that runs Saudi Arabia and works hand in hand with our spooks...

Boston Bombing: Feds Admit No Evidence Tsarnaev Brothers Involved in the Slayings.
Posted by Tony Ryals at 11:52 AM