US Government Drops 121 Bombs Every Day, Reports Say
Meanwhile in India, the Modi government has invited Donald Trump to preside over as chief guest for the Republic Day celebrations.
Newsclick Report 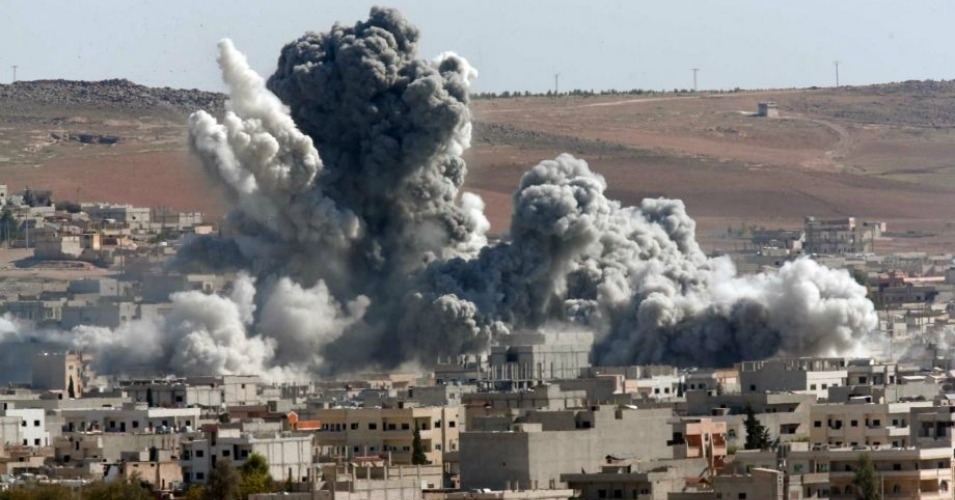 The United States Government, under the Trump administration, reportedly drops a bomb every 12 minutes, which means that 121 bombs are dropped in a day, and 44,096 bombs per year. The Pentagon’s data show that during George W. Bush’s eight years he averaged 24 bombs dropped per day, that is, 8,750 per year. Over the course of Obama’s time in office, his military dropped 34 bombs per day, 12,500 per year. This shows that even though American presidents are all war criminals, Trump is the most vicious of them all.
President George W. Bush’s military dropped 70,000 bombs infive countries. The Bureau of Investigative Journalism reported that under President Barack Obama, there were “563 strikes, largely by drones, that targeted Pakistan, Somalia and Yemen.”
With each new American president, there seems to be an increase in overseas military aggression. For the American media, Obama was a hero of liberal democracy, there was never much talk about his crimes against humanity. Trump, however, is criticised for his outspokenness, he is often painted as an obnoxious buffoon. But even then, the media conveniently neglects the bombs and drone strikes.
In 2016 alone, the year in which the Trump administration took office, the country dropped an estimated 26,172 bombs in seven countries according to the Council of Foreign Relations.

The above chart shows the countries US has bombed in the year 2016.
Journalist Witney Webb wrote in February, “Shockingly, more than 80 percent of those killed have never even been identified and the C.I.A.’s own documents have shown that they are not even aware of who they are killing — avoiding the issue of reporting civilian deaths simply by naming all those in the strike zone as enemy combatants.”
This implies that the attacks in the so called strike zones claim victims based on the fact that they happen to be in the strike zone, however, since majority of the deceased haven’t even been identified, there is no way to find out that those who died were civilians or “enemy” combatants.
In a report about America’s bombings, Journalist and activist David DeGraw said “According to the C.I.A.’s own documents, the people on the ‘kill list,’ who were targeted for ‘death-by-drone,’ accounted for only 2% of the deaths caused by the drone strikes.”
Which means that majority of those killed tend to be innocent civilians.
Meanwhile in India, the Modi government has invited Donald Trump to preside over as chief guest for the Republic Day celebrations.
One must bear in mind that American military aggression is by no means a new phenomenon; it has had a key role in committing grave atrocities to serve its economic interests across the globe, by dropping the atomic bomb in Japan, running puppet governments in Latin America, waging wars of aggression against Korea, Vietnam, China, Iraq, funding terrorist groups to fight the soviets in Afghanistan, ensuring political instability in the middle east, and the list goes on. Do the Indians side with the millions whose lives America has ruined, or would they willingly welcome the American President?
https://www.newsclick.in/us-government-drops-121-bombs-every-day-reports-say
Posted by Tony Ryals at 3:26 PM