On February 22, 2008, WMR reported:
"Dr. Francis Delmonico is Professor of Surgery at Harvard Medical School and practices transplant surgery at Massachusetts General Hospital. He is also the director of medical affairs for the Transplantation Society and an adviser on human transplantation for the World Health Organization (WHO) . . .


Delmonico decried the fact that Israel is outsourcing kidney and liver transplants to Colombia and the Philippines. Israel has, in the past, been a center for dubious human organ trafficking operations. It is also the case that Palestinian prisoners in Israel have sought to sell their kidneys to feed their children. The Israel Medical Association is opposing a bill that would allow the donors of certain organs to be reimbursed by the state. The group claims this will 'open the door' to organ sales."A year after our report, the Swedish newspaper Aftonbladet reported that Palestinian prisoners who died at the hands of Israeli troops had their organs harvested. The Swedish report was met with howls of "blood libel," "anti-Semitism," "hate speech," and other typical histrionics from Jewish groups around the world, which can always be expected to act on cues from their deep-pocketed financiers. Aftonbladet withstood the Jewish onslaught and stuck by its story. It was later vindicated when a 2000 interview with
Yehuda Hiss, then director of Israel's L. Greenberg Institute of Forensic Medicine, saw him admit that he had harvested organs from dead Palestinians in the 1990s and that the permission of the Palestinian families was never requested. The transplants began with corneas, expanded to skin, and then included kidneys and other organs.

Now comes the charges from Iraq's ambassador that ISIL is removing human organs from its victims. But who are the buyers? Given Israel's tacit support for Syrian rebels, including ISIL and groups like the Al Nusra Front that are allied with it, Israel is the likely customer for the Iraqi body parts in a quid pro quo that only a Dr. Frankenstein could admire. For a nation like Israel that is full of anti-Arab zealots and racists, that sort of animosity does not seem to extend, even under bizarrely antiquated Jewish religious laws, to placing Arab kidneys, livers, and pancreas into the bodies of Israeli Jews in need of organ transplants. 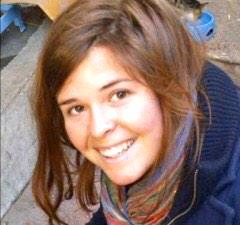 Are one or possibly two Israelis now sporting Kayla Mueller's kidney or kidneys, courtesy of ISIL?

Israeli Defense Force (IDF) and Mossad agents have been witnessed transferring weapons to ISIL units in Iraq's western Anbar province as well as in the area around Quneitra, near the Golan Heights of Syria. In addition, wounded Syrian rebels fighting the government of Bashar al Assad, have been medically evacuated across the Israeli border for treatment in Israeli hospitals. Many of these wounded rebels are either members of ISIL or sympathizers with Al Nusra. In return for Israeli support, ISIL never trains its long-range weapons at Israeli positions but keep them focused on Syrian government forces.  There have also been credible reports that Mossad and the IDF have supplied ISIL with intelligence on Lebanese Hezbollah units in Syria in order that the jihadist radicals launch attacks on the Shi'a Lebanese positions. In fact, ISIL religious dogma instructs its followers that the Shi'as are worse enemies of ISIL than are Jews. U.S. intelligence sources claim that American sources, mostly signals intelligence intercepts of Israeli government communications [carried out by the National Security Agency "special Arabic" linguists, named as such because NSA does not want Jewish members of Congress criticizing it for eavesdropping on Hebrew language communications] have yielded information on Israel's grand design to assist ISIL in Syria in order to destroy Hezbollah.Abdul-Ilah al-Bashir al-Noeimi, the Chief of Staff of the Supreme Military Council (SMC) of the Free Syrian Army, which has refused to expel Al Nusra, Al Qaeda, or ISIL members from its ranks, secretly trained in Israel in 2013 under the guise of his being admitted to the country to undergo medical treatment for wounds he is alleged to have received in Syria............
Posted by Tony Ryals at 7:52 PM