9/11: U.S. Moves Its ISIS Mercenaries From Syria To Afghanistan


U.S. Moves Its ISIS Mercenaries From Syria To Afghanistan

JUST AS THEY CREATED AL QAEDA IN AFGHANISTAN TO FIGHT RUSSIA SO MANY YEARS AGO AND LIED TO US BY CLAIMING AL QAEDA WAS THE SOLE PERPETRATOR OF THE 911 FALSE FLAG THAT LED US INTO IRAQ INSTEAD OF FIGHTING OUR REAL ENEMIES IN ISRAEL,SAUDI ARABIA,THE UAE AND THE CITY OF LONDON ETC.....


US Evacuates ISIS Militants from Syria and Iraq to Afghanistan 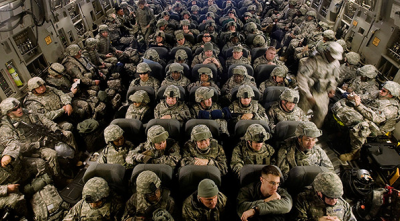 On Sunday, February 4, 2018, Iranian Defense Minister Brigadier General Amir Hatami stated that the U.S. is transferring ISIS to Afghanistan to justify its presence in the Central Asian region.
Brigadier General Amir Hatami emphasized that U.S. had created ISIS to dominate Syria and Iraq, but after the ISIS’ defeat in those two countries, the United States tried to transfer the group to Afghanistan in order to justify their continuing presence in this country.
On Thursday, February 6, 2018, Chief of Staff of the Iranian Armed Forces Maj. Gen. Mohammad Bagheri blamed the U.S. for relocating members of the ISIS terrorist group from Syria and Iraq to Afghanistan.
According to him, since ISIS and other terror groups lost their territories in Iraq and Syria, the Americans have been relocating the terrorists to Afghanistan by various means.
Moreover, Mohammad Bagheri believes that Washington creates tension and conflict in Southwest Asia.

“The US has to gather up its troops and leave the regional countries to take care of their own security,” he added.

For his part, the Leader of the Islamic Revolution Ayatollah Seyyed Ali Khamenei said in late January that the goal behind Washington’s move to relocate ISIS terrorists to Afghanistan is to justify its military presence in the region and to provide security for the Zionist regime. He also called the Americans as the main source of instability in Afghanistan. At the same time, by words of Khamenei, the U.S. intends to promote its political and economic interests through the destabilization of Afghanistan.
It’s worth noting that several days ago the U.S. started pulling its forces from Iraq. However, the American servicemen don’t return to home soil. They are redeployed to Afghanistan, and it is not unlikely that they traveling with ISIS terrorists.
According to many experts, the number of ISIS militants in Afghanistan is estimated at 7,000 fighters. Apart from existing forces, the redeployment of reinforcement from Iraq and Syria will allow them to strengthen positions in the country that is a direct threat to the civilians.
*
Sophie Mangal is a special investigative correspondent from Inside Syria Media Center where this article was originally published.
Featured image is from the author.
The original source of this article is Global Research
Copyright © Sophie Mangal, Global Research, 2018
Posted by Tony Ryals at 1:52 PM