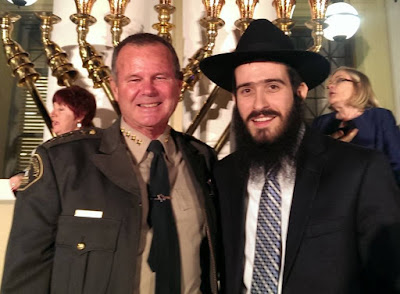 Above, we see Sheriff Stan Sniff with Rabbi Shmuel Fuss from a Chanukah Festival in Riverside - The two have worked closely together.


Not to forget that Israeli trained San Bernardino Sheriff John McMahon of Islamic terrorist false flag where even the 'Islamic terrorist'  Syed Farook , county employee and alleged perpetraitor Syed Farok and his brother U.S. Navy intelligence of the same name name and Enrique Marquez were in bed with Russian-ISRAELI wives...The Israeli controlled U.S.Homeland Seurity and ICE still appears to be covering up for Israeli trained sheriff there.Of course this Chabad Lubavitch Rabbi Shmuel M. Fuss seems a queer Zionist scumbag in his own right,bribing Riverside Mayor Rusty Bailey to light menorah in County Historic Courthouse where Christmas lights no doubt no longer shine........
Note from this January 2017 article that Russian-Israeli wife of Enrique Martinez was supposed to be sentenced in November and yet now there is no media report of outcome or even if sentencing occured.The ADL and Israeli trained Riverside sheriff McMahon must be proud.....And why was the Islamic terrorist and county employee not angered with his brother and friend who married Israeli connected Jews ?!How did all of sheriff McMahon Israeli training fail him ?

The Russian-born wife of the California man accused of supplying guns used by another couple who killed 14 people in San Bernardino pleaded guilty on Thursday to federal immigration fraud charges, the US Attorney's Office said.

Mariya Chernykh, 26, became the second person convicted in an immigration fraud scheme linked to the December 2015 massacre by Syed Rizwan Farook and his Pakistani-born wife, Tashfeen Malik, who authorities said were inspired by Islamic extremism....

Farook's brother, Syed Raheel Farook, 31, pled guilty to a single count of conspiracy to commit fraud earlier in January, admitting that he lied on immigration forms that paved the way for Chernykh, his wife's sister, to engage in a fraudulent marriage to Marquez.