'MOSSAD DID THE BARCELONA ATTACK' 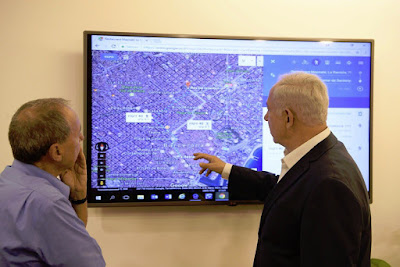 There is a belief that Mossad, and its friends from the USA, UK, Philippines, Turkey France,  etc., carried out the attack in Barcelona.

"As the terror attack unfolded in Barcelona, Benjamin Netanyahu was briefed by staff from the local Israeli embassy on live video conference." 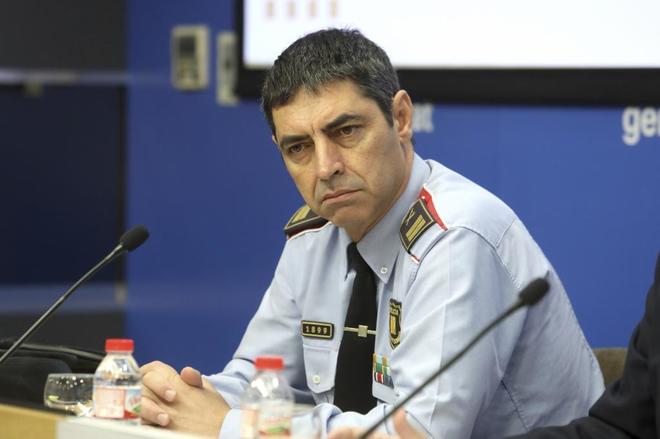 In January 2017, a group from the Barcelona police (Catalonia's Mossos d'Esquadra) was in Israel to train with Israeli secret agents.

The Barcelona police are trained by Mossad

The Barcelona police are linked to the extreme Jewish right 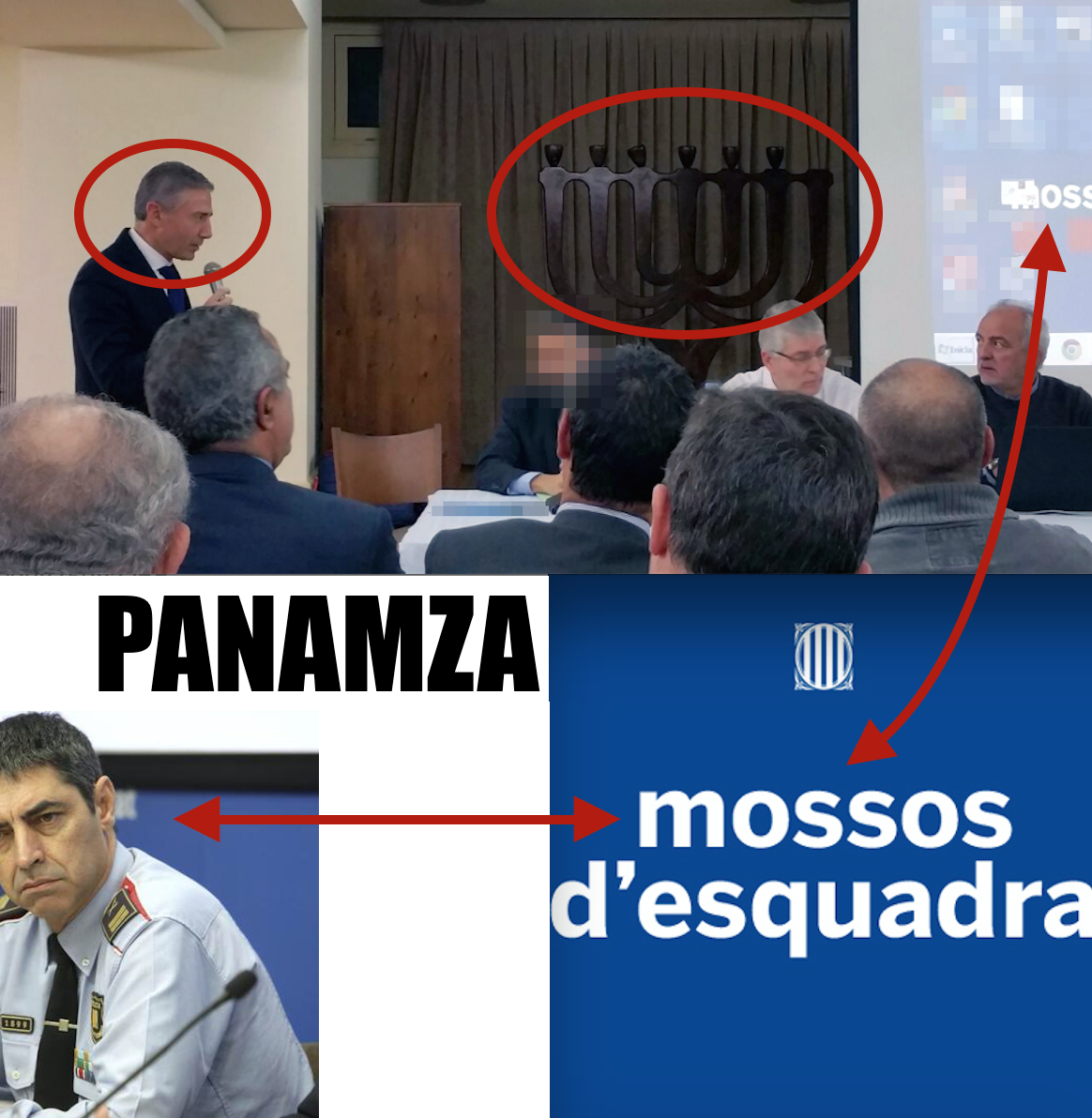 Josep Lluis Trapero, boss of the Barcelona police, has links to Israel. 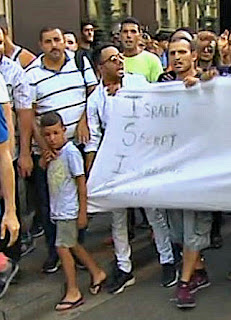 Marchers in Barcelona have pointed out that ISIS is the Israeli Secret Intelligence Service.

Below is what we wrote earlier in various blog posts: 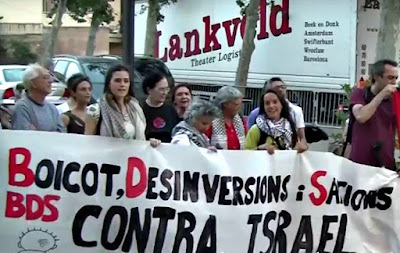 Israel has reasons to dislike Spain.
In April 2017, the Mayor of Barcelona condemned Israel.

Rival drugs mafias are at work. 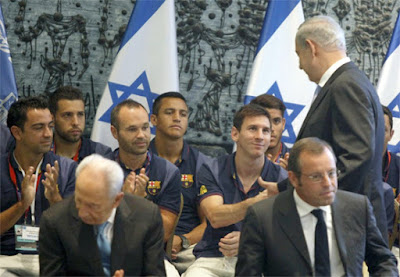 
No Israelis were listed among the Barcelona attack's victims. 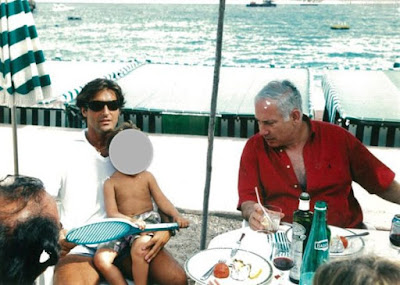 The French-Israeli businessman, Arnaud Mimran, and Netanyahu. Mimran is suspected of being close to the Franco-Israeli mafia. france24.

There is a belief that the Kosher Nostra in Spain, and in France, has links to criminal activities.

A document about "setting up a controlled delivery operation between Barcelona and France" bears the signature of François Thierry." 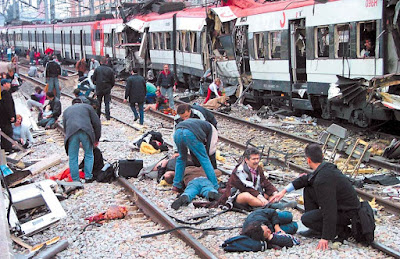 The Madrid Bombings of 2004 were apparently carried out by the security services.

According to The London Times (Madrid Bombers Linked to Spanish Security Service ) :

"THE man accused of supplying the dynamite used in the al-Qaeda train bombings in Madrid was in possession of the private telephone number of the head of Spain’s Civil Guard bomb squad.

"Emilio Suárez Trashorras, said to have supplied 200kg of dynamite used in the bombs, had the number of Juan Jesús Sánchez Manzano, the head of Tedax." 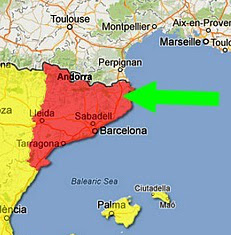 Barcelona is in Catalonia, which is dominated by Israel and Mossad. 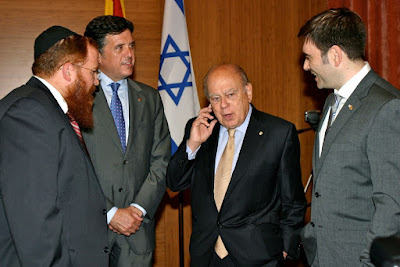 The Catalan Government employs the Israeli security company 'Hancal System Engineering' for assessment in questions of security and control in prisons. 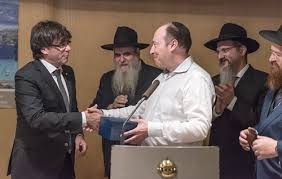 The Catalan Government supports the 'Guardian Homeland Security' company, which trains military and police bodies in questions of security in training camps in occupied Palestine and which uses the logo of the Mossos d’Esquadra, the Catalan police force, to publicise its services. 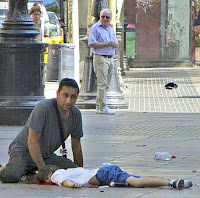 The Catalan Government authorises companies to import and export military material to Israel (torpedoes, ammunition and diverse armaments), for example Tyco electronics or Indra, with central offices in Barcelona.

The Catalan Government allows private Israeli companies of the ICTS security mega-group to interrogate travellers in the El Prat airport in Barcelona. 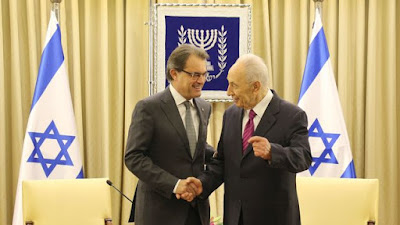 Catalonia's universities, the UAB, the UPC and the UPF, and institutions such as ACC10 collaborate in research projects with Israel in questions of security and defence.


The police force in Barcelona and the surrounding area of Catalonia has been linked to Mossad.

Anna Rius' call for an end to the impunity of israeli security services. 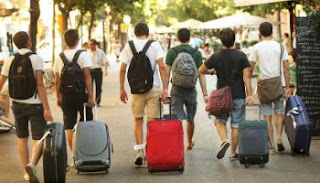 At the start of Summer 2017, almost a thousand Jewish students began a visit to Catalonia to tour the areas of Jewish history in Barcelona. 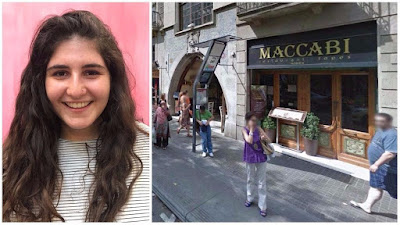 Pupils from London's Jewish JFS school were in Barcelona on 17 August 2017 when the van attack took place.

17-year-old JFS pupil Rebecca Herman says that 'a chance meeting' meant she was not walking on Las Ramblas at the time of the terror attack.

Rebecca Herman and seven friends were due to dine at the Maccabi kosher restaurant near which the attack began.

She said: "We meant to go but we were delayed. We met an Israeli event promoter on the beach. He kept talking to us so we were running late." 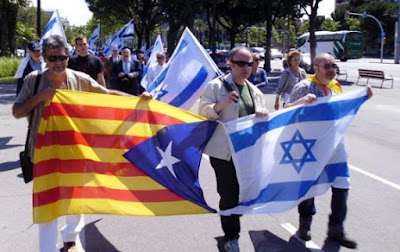 Rabbi Meir Bar-Hen, Barcelona’s chief rabbi, told Channel 2 news in a telephone interview that he was informed by police that the terror attack was not directed at Jews.

A Chabad representative told The Jerusalem Post that the Chabad institute is located close to the scene of the attack. 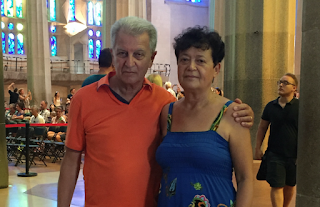 Zinovy Alman and his wife, a Jewish family who were in Barcelona.

Zinovy Alman, from the USA, said that he and his wife, daughter, and 12-year-old grandson, Benjy Krantz spent many evenings during their trip in the Las Ramblas district.

"However on the day of the attack, he said they took a train to Sitges, a coastal town about 25 miles east of Barcelona." 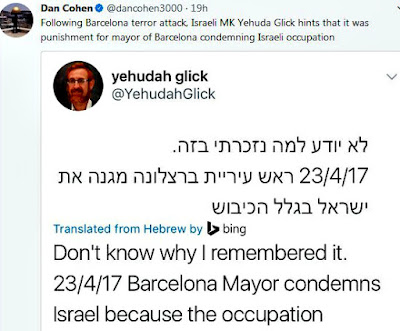 The terrorists are sometomes Israelis.

In 1947, Jews, working on behalf of 'Israel', attempted to BOMB THE BRITISH PARLIAMENT.

According to Associated Press, in September 1947, the Paris police arrested a number of Jews after discovering six aerial bombs with which the Jewish the Stern Gang intended to bomb London.

In 1940, the Jewish Stern Gang (Lehi) proposed intervening in World War II on the side of Nazi Germany.


By 1948, some 200 British Soldiers and 90 British policemen had been murdered by Jewish terrorist gangs such as Irgun...

YOUR CHIEF ENEMY IS ISRAEL.

On 5 Jul 2017, Spain's National Police had an anti-terror drill.

Anti-terror drills are normally held before 'the authorities' carry out false flag attacks.

Drills were carried out before, or at the same time as, the attacks of 9/11, the London Bombings, the Madrid Bombings, the Oklahoma City Bombings, the Norway Oslo Attacks, Sandy Hook Elementary, Batman Shooting and the Boston Bombing. 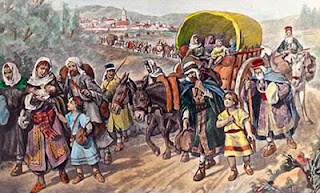 Many Jews were thrown out of Spain after an Edict of Expulsion was issued by Ferdinand and Isabella, in 1492.

The expulsion in Spain was preceded by expulsions in England, France and Germany, among many others.[52][53]

Do certain Israelis want revenge for the dispossession and ethnic cleansing of Jews from Christian Spain?

Spanish and Catalan reactions to the Barcelona attack

The Zionist Israelis are not necessarily peaceful people.


Charlie is sent on a mission to place a bomb at a lecture given by an Israeli moderate. 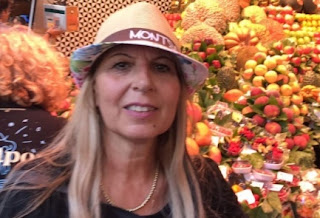 She said: "The hotel where we stayed was right where the attack took place."

Recently a Mossad officer, Benjamin Efraim, was found to be leading an ISIS group. 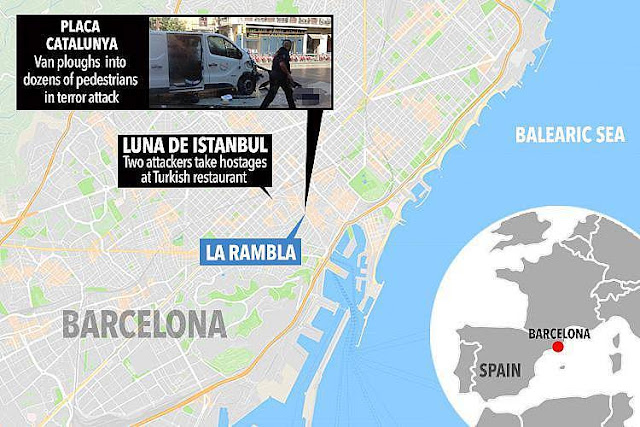 It was reported on 17 August 2017 that "Two armed 'terrorists' are holding hostages inside a restaurant in Barcelona after carrying out the horrifying van attack.

"Police have reportedly surrounded the Luna d'Istanbul eaterie near the Boqueria food market in a bustling district of the Catalan capital."

"There are reports that two individuals involved in the attack are hiding in Bar Luna De Istanbul."

Sky News reported that the attackers, including the driver of the white van, were entrenched in the restaurant.

Why did the police not apprehend the attackers in the restaurant? 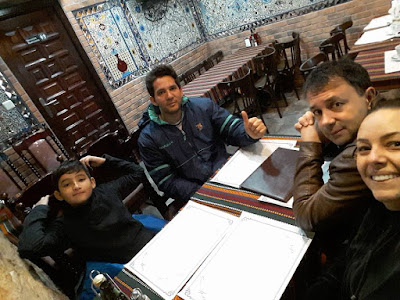 TV3 reported that at least one attacker was holed up in a Turkish restaurant called Bar Luna de Istanbul.

"The driver of the van ran into a restaurant and there were fears that patrons may have been caught up in a hostage drama at the Luna de Istanbul restaurant on Carrer Tallers." 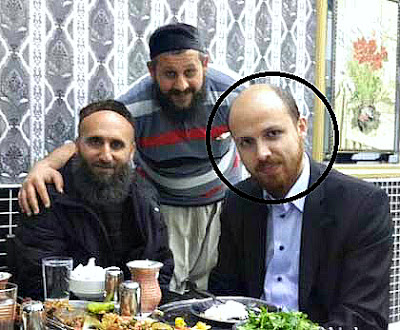 "Negotiations are in progress between gunmen/terrorists and Spanish Police at the Luna De Istanbul Restaurant." 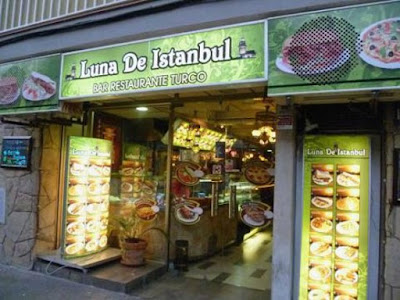 "There is a pattern to the recent terror attacks: Turkish restaurants and sites." 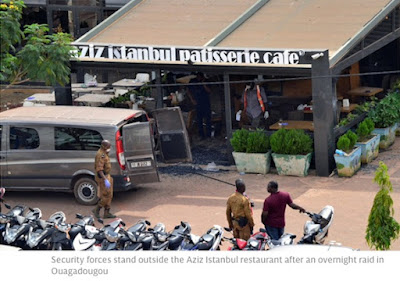 Several foreign nationals were among 18 people killed in an attack at a Turkish restaurant in Burkina Faso's capital, August 13, 2017.

"You will note that in four attacks - an Istanbul restaurant in Spain, a Turkish restaurant in Africa, locations in Turkey, and in the Finnish city of Turka, the Turkish link and name game is there."

General Firtina, attache in Washington in 1991. The Middle East Report concluded in 1998 that probably the greatest strategic move in the Clinton years was "The Ankara Pact"- an alliance between the Turkish military and the USA and Israel. (Turkey, Drugs, Faustian Alliances & Sibel Edmonds)

On 1 January 2017 there was a mass shooting at an Istanbul nightclub.

The mass shooting at the Istanbul nightclub on New Year's Eve was carried out professionally with the involvement of an intelligence organisation, Turkish Deputy Prime Minister Numan Kurtulmus said on 16 January 2017.

"It appears the Reina attack is not just a terrorist organisation's act, but there was also an intelligence organisation involved. It was an extremely planned and organised act," Kurtulmus said during an interview with broadcaster A Haber. 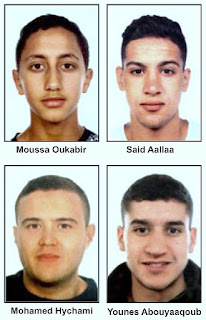 The Barcelona Attack is said to be the work of ISIS.

According to DIA documents, in 2012, the US Defense Intelligence Agency (DIA) was considering setting up an extremist Moslem state in Syria, in order to promote the interests of Israel and its allies.

Thus ISIS was created by the USA and its allies.

ISIS is a US-Israeli creation

ISIS kills Christians but not Israelis.

Israel has cared for ISIS soldiers in its hospitals

The USA and its allies has supplied ISIS with its weaponry and its Toyota trucks.

A Texan plumber discovered that his truck was being used in the war, replete with his business name still on the door. 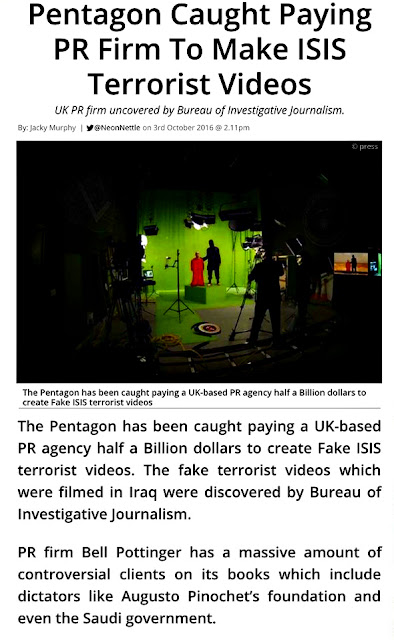 The Israeli Group SITE is used to release the ISIS propaganda videos. 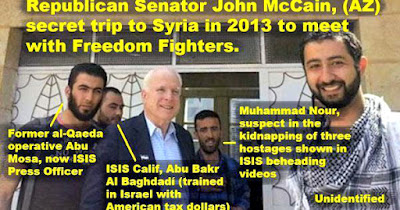 The leader of ISIS (Abu Bakr al-Baghdadi) is said to be an Israeli Mossad agent by the name of Simon Elliot or Elliot Shimon.

The US claims it is attacking ISIS, "yet Russia was able to do in a few months what the US has been unable to do for years."

ISIS is an extension of Al Qaeda.

There have been reports that US soldiers were told not to fire on ISIS targets.

"U.S. military pilots could not get clearance to launch a strike, according to a leading member of Congress."

Donald trump is said to be supporting ISIS. 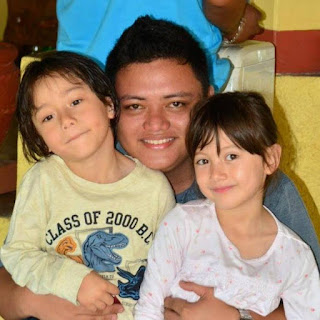