"George Floyd and now-former Officer Derek Chauvin both worked security at the El Nuevo Rodeo club on Lake Street", apparently working sometimes on the same evenings, likely knowing each other. 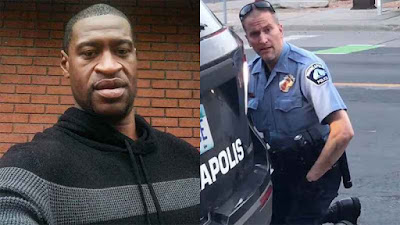 Was the USA 'police racist killing' in Minneapolis USA, leading to the terrible violent riots, a staged false flag?

The world has been horrified by the video, of white Minneapolis police officer Derek Chauvin, kneeling on the neck of black George Floyd, apparently leading to Mr Floyd's death

But: "George Floyd and now-former Officer Derek Chauvin both worked security at the El Nuevo Rodeo club on Lake Street", apparently working sometimes on the same evenings, likely knowing each other. 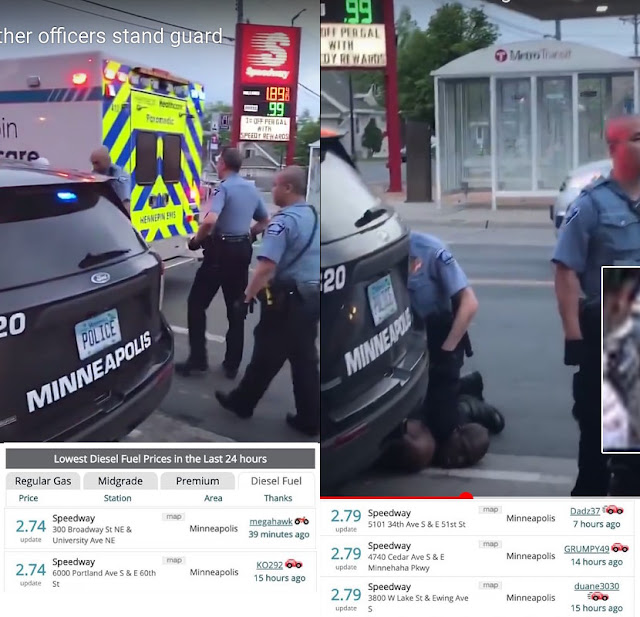 The infamous video alleging to show the violence against Floyd, shows a petrol station across the street

However, the prices are impossible in current year, but seem to date from 2016. Diesel is listed as 99 cents per gallon (about 3.8 litres). The sign lists a petrol price of $1.89 per gallon, whereas current prices in that area start at $2.79.

Is the video of Floyd getting abused by the policeman, an old video?

Are the powers that be inflaming race-hate and a summer of riots in the USA, for their own satanic purposes?

The next-door neighbours of the policeman Derek Chauvin who allegedly killed Mr Floyd, say they had no idea he was a policeman

The mayor of Minneapolis, Jacob Frey, is Jewish

Eyewitness accounts and videos confirm that agent provocateurs were at work in Minneapolis.

"I asked a police friend about this knee-on-neck method of restraint.

"In his years of training, he’s never been taught to use this as a method of restraint.

"I wonder when these officers were hired (if they were hired), and where were they trained?

"Was his neck broken? The autopsy was inconclusive, so apparently not as that would have been easily spotted.

"The police cruiser that arrested him has a completely different number (830) than the one where he was “killed” (320).

"There is a time gap that doesn’t explain why the detainee was moved or how he ended up in the roadway.

"How does he go from being sat against the wall to being choked with a knee on his neck on the other side of the street and in the roadway?"

"Floyd was cuffed at his car, on quiet street. Then he was held briefly on a sidewalk, before being perp walked to a cruiser.

"But instead of going into nearest cruiser, No. 830, he’s taken to an opposite corner on a busier street to a second cruiser, No. 320, and in view of an audience.

"He’s then choked in full view, slowly over many minutes, while shouting that he can’t breathe."

"A video shows Floyd removed from his car by police. He looks unstable and intoxicated, or perhaps handicapped. Initially, he appears to be uncooperative, but then stops resisting and is compliant.

The Daily Mail talked with Chauvin’s neighbors. The neighbors states, “We had no idea he was a cop. We thought he was a realtor.”