https://www.timesofisrael.com/ex-mossad-agents-formed-company-that-targeted-clinton-campaign-bds-activists/
JTA — An Israeli company made up of former Mossad agents that specialized in covertly spreading messages to influence what people believed and how they behaved targeted the boycott Israel movement on American college campuses.
Psy-Group also took credit for turning Bernie Sanders supporters against Democratic candidate Hillary Clinton using Facebook during the 2016 US election, the New Yorker reported in “Private Mossad for Hire,” an article by Adam Entous and Ronan Farrow published this week............ 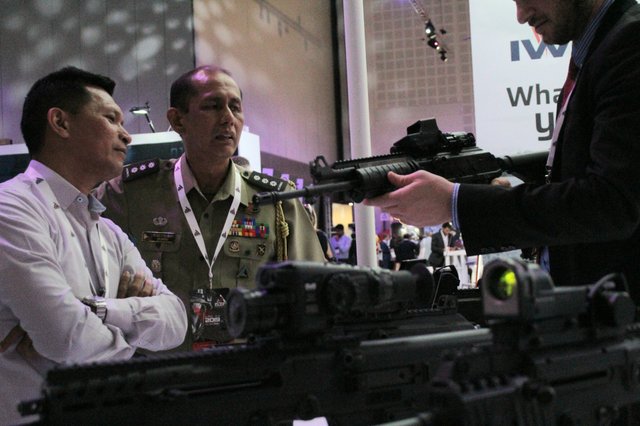 Megan Giovannetti
A Philippines military official is seen at the expo admiring Israeli-made weapons. An Amnesty International report from earlier this year named the Philippines as one of several “questionable” states that Israel trades arms with.
The Tel Aviv expo hall hummed with activity.
Inside, Israeli weapons manufacturer and dealer SK Group proudly displayed artillery that was “combat-proven,” having been used by the Israeli Defense Forces. The Israeli spyware company NSO Group Technologies also had its own sleek booth, with representatives who refused to speak to anyone who was not a military or government agent. NSO is the creator of the surveillance software Pegasus which has been reportedly used to persecute, jail, and even kill journalists, activists, and other dissidents in countries like Mexico and Saudi Arabia.
In early June, the tenth annual Israel Defense Exposition took place in the “liberal” capital of Israel. Hundreds of Israeli and international arms and cybersecurity companies showcased their state-of-the-art weaponry to war industry dealers from all over the world.
Among the event’s attendees were military officials from Myanmar, South Sudan, and the Philippines—just a few countries Israel sells to that have been accused of wholesale violations of human rights.
Early the morning of June 4, various groups of Israeli human rights activists peacefully protested outside the Tel Aviv expo hall. Delegates from Amnesty International-Israel handed out flyers detailing truths regarding some of Israel’s most loyal customers. A banner in Hebrew read, “Israel, stop exporting weapons to human rights abusers,” while members of the feminist anti-occupation group Coalition of Women for Peace held posters reading, “Enter here for blood money” and “War starts here.”
Coalition of Women for Peace activist Daniela, who declined to give her last name due to safety concerns, told me that protesting the expo is critical because it’s getting bigger every year. As of this year, Israel is the world’s eighth largest exporter of weapons in the world—“and the first if you calculate it per capita,” she explains. 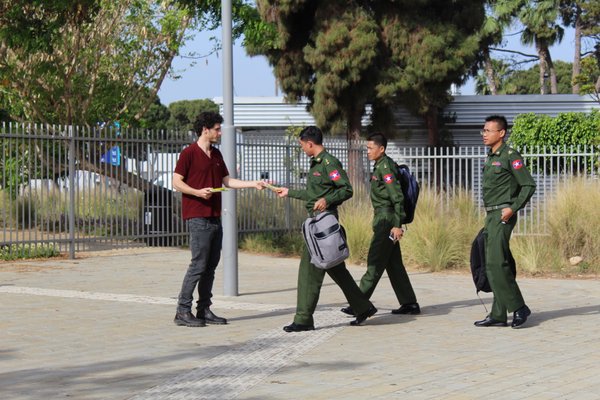 Megan Giovannetti
Israeli human rights activists hand out flyers to military officials from Myanmar.
Daniela says the lack of information and regulation allowed Israeli companies to “sell their weapons . . . to any country in the world,” regardless of their human rights records.
Chen Brill Egri, a campaigner for Amnesty International, said she came to demonstrate “because people come here from countries like Myanmar and South Sudan, which are under international embargoes, and other countries like the Philippines and Angola, which are other countries we should not trade arms with.”
Earlier this year, Amnesty published a report in Hebrew about private Israeli security companies continuously exporting weapons and cyber technologies to states that routinely violate human rights or commit crimes against humanity. The report named states including South Sudan, Myanmar, the Philippines, Cameroon, Azerbaijan, Sri Lanka, Mexico, and UAE as “questionable.”
Furthermore, the report stated that “often these weapons reach their destination after a series of transactions, thereby skirting international monitoring and the rules of Israel itself.”
Brill Egri explained that there is no public disclosure of details about which countries buy weapons or for what amounts. Amnesty International, she says, is trying to amend existing legislation regarding the supervision of Israeli exports, “so it will include one section that says it is forbidden to give a license to countries that commit human rights violations under humanitarian law.”
Several activists I spoke with say the illegal occupation of Palestine is a factor driving arms sales. Daniela of the Coalition of Women for Peace said her group sees “a direct connection between the military industry in Israel and the occupation.” She notes that Israeli security companies market their products as “combat-proven” or “battle-proven,” “after they’ve been developed and used in the occupied West Bank and in the Gaza strip.”
Guy Laron, professor of international relations at the Hebrew University of Jerusalem tells The Progressive there is “a synergistic link between [the Israeli Defense Forces] and the defense industries: The occupation allows Israel to be a laboratory.”

“After each occurrence of bloody clashes in Gaza, there is actually a wave of new orders of weapons from repressive regimes.”

In fact, he continues, “after each occurrence of bloody clashes in Gaza, there is actually a wave of new orders of weapons from repressive regimes.”
Sa’ar Korush, formerly CEO of the company that built the separation barrier surrounding parts of the Gaza Strip, told Bloomberg that, just two weeks after the Great March of Return began in Gaza last year, “Gaza has become the showroom for the company’s ‘smart fences,’ as customers appreciate that the products are battle-tested.”
The ability to test weapons and other security technologies on the occupied Palestinian people is what gives Israel its competitive edge, says Laron, especially within the last twenty years when “more and more countries became worried about ‘Islamic terror.’”
During the expo’s opening ceremony, retired Major General Danny Yatom, former director of the Mossad—Israel’s CIA equivalent—spoke emphatically. “Terror is all over the world,” he told the crowd of arms dealers and buyers, many clad in their military garb. “We need to create an offensive, a democratic offensive, to defend ourselves. Act as an iron fist against terror.”
Daniela disagrees. “They call it defense, they call it security. It’s not about that,” she says. “I think that the weapons industry is a very good example of what the occupation is built on and what are the motives behind it.”
As she put it, “The occupation is a business of its own. There are companies and there are people who make a lot of money out of this.”
Laron added that, since before the state of Israel’s inception, it has moved in the direction of a war-based economy. “It wanted to be an industrial economy,” Laron explains, but, “there was an understanding that Israel would be involved in conflicts from now on,” so it created its foundation based on defense industry. 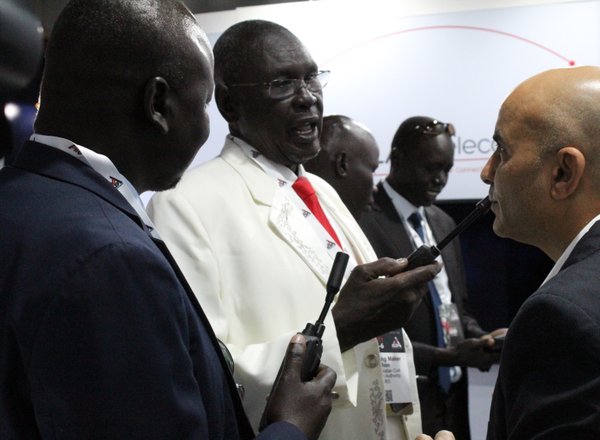 Megan Giovannetti
A South Sudanese Civil Aviation Authority official tests communication technology at the expo from an Israel-based security company.
According to Laron, Israel grew exponentially in weapons production and in defense industry investment in the 1970s, selling arms to apartheid South Africa. At the time, “South Africa was by and large the largest importer of Israeli weapons.”
And in 2016, declassified U.K. documents indicated that Israel sold arms, including Skyhawk jets, to Argentina before, during, and after the 1982 Falklands war against British forces—despite, Laron adds, Argentina being notoriously anti-Semitic.
Israel then became a global player in the 1980s by pioneering the use of drone technology and targeted assassinations, Laron continued, no doubt using these now-popular tactics well before the United States.
Given these historical trade relationships, he said, it’s no wonder the current Israeli government “obviously has not qualms with cooperating with these regimes.” This just goes to show “how much Israel values weapons exports over human rights.”

There’s Something Rotten in Virginia: Israel Is a Malignant Force in Local Politics

by Philip Giraldi
One of the more interesting aspects of the relentless march of the Israel Lobby in the United States is the extent to which it has expanded its reach down into the state and even local level. Previously, the American Israel Public Affairs Committee (AIPAC) and the hundreds of other Jewish and Christian Zionist organization dedicated to promoting Israeli interests had concentrated on the federal government level and the media, believing correctly that those were the key players in benefiting Israel while also making sure that its public image was highly favorable. The media was the easy part as American Jews were already well placed in the industry and inclined to be helpful. It also turned out that many Congressmen and the political parties themselves had their hands out and were just waiting to be bought, so “Mission Accomplished” turned out to be a lot easier than had been anticipated.