THIS JEWISH CULT harrassed and abused and won a court case against a Mayan Mayor of San Juan La Laguna for expelling them from that village several years ago even though the Maya have their own laws that are more ethical than those of the country of Guatemala itself.Had the indigenous community of San Juan La Laguna been respected by the Guatemalan government the Jewish cult would not be committing acts of pedophilia and under age forced marriage which has actually been supposedly made illegal in Guatemala in recent years.Note the photos of women and children dressed like Taliban women in burkas,(or paradoxicaly like victims of a Spanish inquisition), in Daily Mail article below. 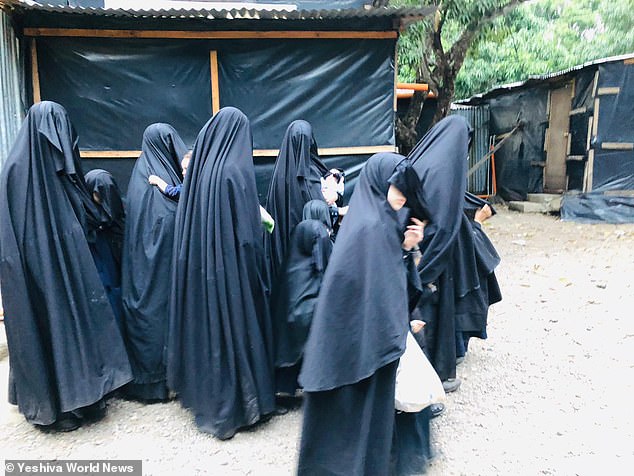 Sara Helbrans, 32, grew up a member of the Jewish ultra-orthodox Lev Tahor sect started by her father, Shlomo Helbrans
He drowned in a river on a trip to Mexico in 2017 and her brother is now at the helm
Her husband is a member of the group based in Guatemala
Sara has fled to Brooklyn with her six children claiming widespread sex abuse and forced marriages in the group
Her husband denies the claims and the cult says she is responsible for abusing her children. She is now battling for custody
By DAILYMAIL.COM REPORTER

View comments
A woman who escaped from an ultra-orthodox Jewish cult in Guatemala has arrived in Brooklyn and blown the whistle on its alleged 'barbaric and abusive' customs.

Sara Helbrans, 32, had been a lifelong member of the Lev Tahor sect founded by her father until earlier this year.

She was told her 13-year-old daughter would be forced to marry the son of a community leader. Her objections were ignored so she fled to the U.S. along with her six children.

Now she is lifting the lid on the secretive group 's way of life.

It has led to the start of numerous custody battles and the arrest of five former community leaders, including her brother.

Sara alleges the group from which she escaped, is a cult — and she and her six kids are in desperate need of protection.

'I am very imminently afraid from the cult and what the children's father and other cult members may do now that we are no longer under their power and manipulation,' according to filings she submitted to a Brooklyn court.

Before Sara fled, Helbrans had been a part of the cult her entire life.

Her father, Shlomo Helbrans, founded the group in Jerusalem in 1987 and flourished after he moved the group to the U.S. in the early 1990s.. He drowned in a river on a trip to Mexico in 2017 according to the New York Post.

The community, which believes the Jews must remain in exile, has won the admiration from some for its devoutness but others condemn it to cult-like sect

Sara says the group has continually abused and tortured its members.

It is accused of kidnapping and torturing children and severely restricting the lives and wellbeing of its followers.

Lev Tahor is a radical strain of Hassidic Judaism that believes television and computers are bad and must be avoided.

The group rejects the state of Israel because it views the Jews as a people who must remain in exile.

The sect were based in Canada in 2014 but then had to flee amid allegations of child abuse and suspicions the group was carrying out underage marriages.

They then headed to San Juan La Laguna in Guatemala from which they were also moved on to a different village after similar accusations.
Posted by Tony Ryals at 3:11 PM