The U.S. has cried about Russia bombing Al Qaeda in Syria before but if you were a country,(U.S.)
who created and trained Al Qaeda Islamic terrorists in Afghanistan only to have them use that training to
take down the Twin Towers or WTC in New York on September 11,2001 wouldn't you be cheering thex Russians on in the anti Al Qaeda bombing campaign and demand that your own U.S, military emulate them ?
Of course we know that 9/11 WAS REALLY A FALSE RELIGIOUS FLAG USED AS AN EXCUSE TO INVADE AFGHANISTAN AND IRAQ AND THAT ISRAEL AS WELL AS THEIR JEWISH ZIONIST MASTERS AND FINANCIERS IN THE ROTHSCHILD'S CITY OF LONDON AND THEIR PUPPET TONY BLAIR AS WELL AS FRENCH RIGHT WING ELITE AND OTHERS WITHIN THE EU CONSPIRED TOGETHER TO CREATE THE 911 FALSE RELIGIOUS FLAG THAT LED TO EXTERMINATION AND NEAR EXTINCTION OF ANCIENT ARAMAIC SPEAKING CHRISTIANS WHOSE ANCESTORS MAY HAVE BEEN THE REAL JEWS.........
It was Saddam Hussein whO protected and gave political power to Christians in Iraq before  U.S.invasion.
U.S.and its Israeli allies in  effect committed cultural and physical genocide against Christians who in modern times still spoke Aramaic the language of Jesus and one whose spoken and written language pre-dates Hebrew.American Christians are Zionist prostitutes NOT Christians ! 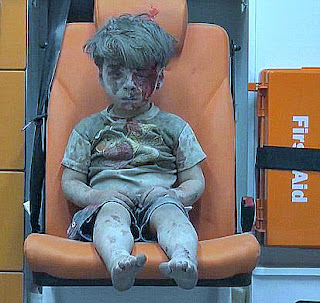 The above propaganda photo of Omran was made in al-Qaeda occupied east-Aleppo.


The USA is supporting the al-Qaeda forces in East Aleppo.

The USA is blaming a Russian airstrike, targetting the al Qaeda forces, for the apparent injuries to Omran.
The Russian defence ministry has accused al Qaeda's anti-Assad rebels of detonating an explosive device, thus injuring the boy.

This suggests the house was hit by a rebel mine rather than an airstrike, or, that the propaganda story is fake. 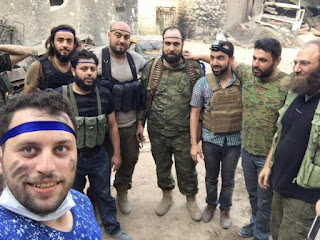 Mahmoud Raslan (front) with his terrorist friends, who beheaded a child.

Mahmoud Raslan is the "photojournalist" who took the photo of Omran.

Mahmoud Raslan is close friends with the Nour al-Din al-Zinki Movement, which was caught on film beheading a young boy. 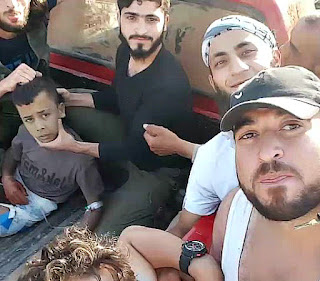 Above, we see the boy executed by the USA's allies in Syria.

In Syria, the USA is supporting the Nour al-Din al-Zinki Movement.

The Nour al-Din al-Zinki Movement was caught on film beheading a young boy.

The Omran photo is credited to the Aleppo Media Center.

The Aleppo Media Center have their own page at the Times of Israel.

What makes the photo, and video, of Omran look possibly fake?

1. No one attends to the boy

2. The boy looks scared of his rescuers.

The "Wounded Boy In the Orange Seat" - Another FAKE. 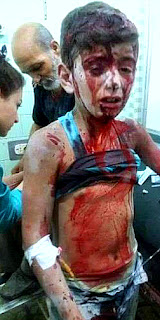 Compare with this boy above in west-Aleppo.

No "western" media showed this boy and his suffering.

The boy suffered a head wound from an al-Qaeda missile.

More Here: The "Wounded Boy In the Orange Seat" - Another FAKE. 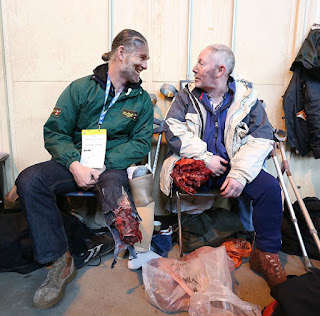 Above, we see two actors with fake gory wounds seen here laughing in between playing their part in a western military exercise. (Photo link livestream).