PHUKET: Nine Israeli security specialists have been arrested by Thailand's Army in a raid on Royal Thai Police offices in Bangkok.

The raid, carried out by armed soldiers yesterday morning, saw the Israelis and the police officers they were instructing carried away to an Army base.
It is believed the Israelis were employees of a private company that had been contracted to teach the police new surveillance techniques involving telephones and telephone data bases.The Commissioner-General of the Royal Thai Police, General Somyot Pumpunmuang, spoke just one word when asked about the incident: ''Misunderstanding.''The Army did not make contact with senior police before undertaking the raid in which troops were carried to the scene in three Humvees. The Israelis are understood to all be former members of the country's military.

In May 2015, the Thai army arrested nine Israeli 'security specialists' in Bangkok.
"The raid, carried out by armed soldiers ... saw the Israelis and the police officers they were instructing carried away to an Army base..."

The Israelis are understood to all be former members of Israel's military. 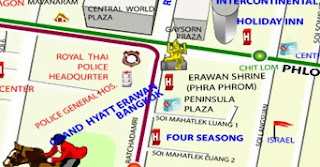 The nine Israeli security specialists were arrested in a raid on the Royal Thai Police offices in Bangkok.

The Erawan Shrine is next door to the Royal Thai Police HQ.

The Erawan Shrine is almost next door to the Israeli Embassy.

The King of Thailand.

"In Thailand, the Jewish population began to thrive ... with the arrival of Jews from... Iran.

"The Vietnam War in the 70s brought an influx of Jewish American soldiers to Thailand.

"Numerous Israeli families also immigrated to Thailand during the 1970s...

"A large number of high-level Thai officials have visited Israel on study tours and training courses..." 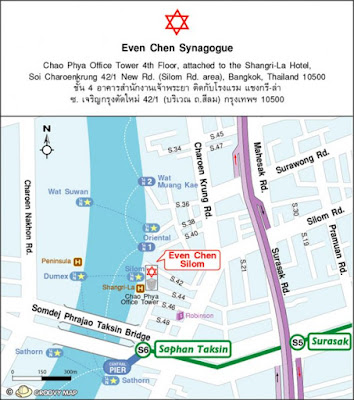 A large number of Thais have taken part in Israeli run courses in Thailand.

"In 2003, Thailand hosted some 100,000 Israeli tourists who chose it as their prime holiday destination.

The suspect in the Yellow T-shirt spoke English.

"He did speak in English to the motorbike taxi driver who transported him from nearby the Erawan shrine - the site of the bombing - to his next destination in a soi (side-street) off business thoroughfare Silom road, a short ride of no more than 5 minutes...

"Another intriguing factor is how unscathed the Erawan shrine actually is (already re-opened for business, with huge crowds)."

"Internet users didn't take long to zero in on where one could find the yellow shirt the suspect is wearing: an Indonesian clothing shop and corresponding website called Amaranthine Fashion." 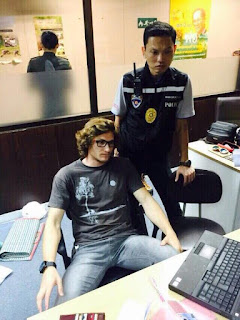 Above we see another suspect. 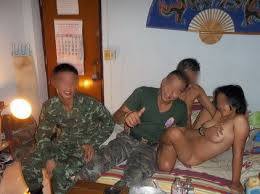 Above we see some of the Thai military. 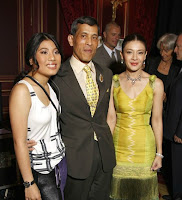 His son and heir apparent, Maha, has reported business ties with the former prime minister Thaksin, who is reportedly favoured by the US government. 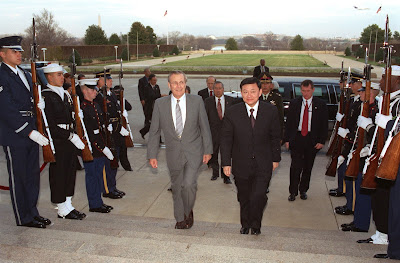 The USA has been critical of Thailand's current military government.

The U.S. has censured the military for the overthrow of the Thaksin government.

"Thaksin has cultivated Crown Prince Maha Vajiralongkorn, by paying off his debts and providing a luxurious new house in Bangkok.

"Maha Vajiralongkorn has preferred to spend time in Munich with his favorite consort, rather than with his official wife and children in Thailand, and has kept a succession of air hostesses as his mistresses. 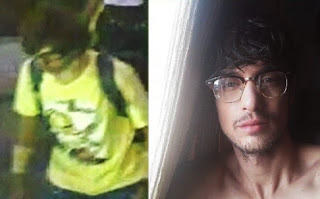 Above we see a man wanted for questioning by Thai police in connection with the Bangkok bombing (left) and Australian model Sunny Burns (right). 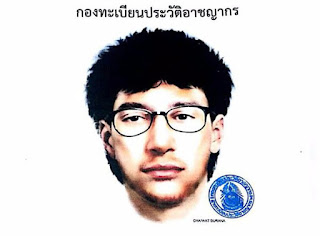 "Soon police discovered CCTV footage of Burns returning from the gym and preparing for his English class away from the blast's location, clearing him of any wrongdoing."

The Bangkok bombings may be related to Thailand's growing frienship with China and Russia. Thailand has been boosting ties with Russia and China

Thailand has increased joint air and marine exercises with China.

China has reportedly sought access to Thailand's Sattahip naval base.

America's alliance with Thailand is in trouble. 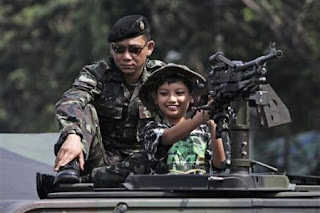 "Whoever made carried out these attacks has played into the hands of the hawkish Thai military government, regardless of the intentions.

"It potentially delivers them the justification for harsher security measures or, even worse, a reason to somehow remain even more of an influential power stakeholder in the near distant future, thanks to political changes being undertaken since the coup."

Glyn Davies (above) was recently appointed as US Ambassador to Thailand.

He is a War College graduate versed in 'non-military instruments of power.'

"The current Thai government has been gravitating ever closer to China."

The CIA may want a civil war in Thailand?

Most of those injured were tourists from China and Taiwan.

"The perpetrators intended to destroy the economy and tourism because the incident occurred in the heart of the tourism district," Defense Minister Prawit Wongsuwan said.

The bombs went off near the Erawan shrine, a tourist attraction.

The army has ruled Thailand since May 2014, when it ousted the elected government after months of anti-government protests.

"Security sources said the incident was believed to be politically motivated, and may involve the move to strip former PM Thaksin Shinawatra of his police rank, the draft charter, the looming military reshuffle, and the spillover from unrest in the deep South."

At least 100 injured by biggest attack

In Thailand, in 1980, one third of the rural population lived in absolute poverty.

This could mean one meal a day and no money to buy shoes or typhoid medicine.

Great for the Americans getting their cheap shoes and clothes made by child labour.

In 1946 King Ananda was found shot in his bedroom in the Grand Palace in Bangkok.

This ensured that the teenage Bhumibol became king.

And it ensured that pro-American Field Marshal Pibul became the power behind the throne.

The fascist Field Marshal Plaek Phibunsongkhram (Pibul) was Prime Minister and military dictator of Thailand from 1938 to 1944 and 1948 to 1957.

Bhumibol had once said of his brother's murder, "It was not an accident...it was political."

King Bhumibol has a difficult job, surrounded as he is by certain 'corrupt fascist' generals who allegedly have links to the CIA.

Thailand has hosted one of the CIA's secret prison sites.

The CIA has met its al Qaeda friends in Pattaya in Thailand.

The child brothels in Thailand are said to be protected by certain Thai generals.

The military is said to have links to drugs and karaoke bars.

In 1973, the army shot pro-democracy students.

In 1992, when there was an uprising in Bangkok, the generals killed hundreds of people.

In 2001, Thaksin Shinawatra (above) became prime minister of Thailand.

Because of this, his main support base has been the rural poor.[1]

Thaksin made "new strategic overtures towards Beijing" and undermined "the US's near monopoly on military-to-military training in Thailand.

(US, Thailand: A conflicted alliance)

Thaksin was toppled by the military in 2006.

When Thaksin was toppled, (reportedly by the CIA) "Bush's emissaries in Thailand... too swiftly and too warmly embraced the military coup-makers, many of whom are known to have close ties to top US officials."

The coup "was orchestrated by several Thai security and military officials with close and long-time ties to Washington.

"They include CIA-trained Squadron Leader Prasong Soonsiri and the US-trained General Winai Phattiyakul, former director of the Directorate of Joint Intelligence at the Supreme Command's headquarters where US intelligence officials are allegedly in residence.

Boyce with General Surayud who took control of Thailand after Thaksin was toppled.

"US security officials and former US ambassador to Thailand Ralph 'Skip' Boyce are also known to have generational ties to Privy Council president Prem Tinsulanonda, who Thaksin's supporters have accused of masterminding the 2006 putsch..."

Thaksin Shinawatra and his sister Yingluck are most popular in the RED areas shown above.

Yingluck Shinawatra became Prime Minister in 2011 and was removed from power in 2014, as the result of a decision by the Constitutional Court.

In Thailand it has been the Red Shirts (supporters of the Shinawatra family) against the Yellow Shirts (traditionalists).

The big question is - does the CIA support the Red Shirts or the Yellow Shirts?

Or, does the CIA simply want to cause Libyan-style chaos?

The Economist gives us a clue as to what the CIA may be trying to achieve in Thailand.

The Economist recently suggested that we may see the Destabilization and Breakup of Thailand?

Yingluck Shinawatra's top people could flee to the north and set up a separate state.

Tony Cartalucci (altthainews.blogspot.ca) refers to the modern imperial agenda of divide and rule.

According to The Economist:

Suthep Thaugsuban (above) has been the leader of the Yellows, the opposition to the Shinawatras.

Courts have ruled that he is responsible for deaths and injuries sustained by red-shirt protesters during the political unrest 2010.

He was also found responsible by a Court for the assassination of Italian journalist Fabio Polenghi, who was covering the 2010 protests.[13]

Political crisis in Thailand: You go your way, I’ll go mine

He has written that Yingluck Shinawatra's government "bankrupted a disastrous vote-buying rice subsidy and has subsequently failed to pay rice farmers..."

He suggests that the Shinawatras are increasingly unpopular.

"The Thai 'civil war' Western analysts have long been predicting ... would most likely only materialize using the 'Syrian-model' of covert invasion combined with a coordinated propaganda campaign already being carried out by the Western media.

"Instead of Jordan, Lebanon, Turkey, and northern Iraq feeding militants into Syria, this new war would consist of Cambodia feeding militants and material in through northeast Thailand, with the resulting conflict appearing to be between 'Thaksin’s political stronghold' there and the rest of the country...

"Secession and 'civil war' in Thailand are impossible.

"Thailand is not divided. If anything, now more than ever it is united in purpose against an increasingly destructive, perpetually self-serving regime that has long since overstayed its welcome..."

The CIA may be supporting all the different factions.
Posted by Tony Ryals at 7:15 PM